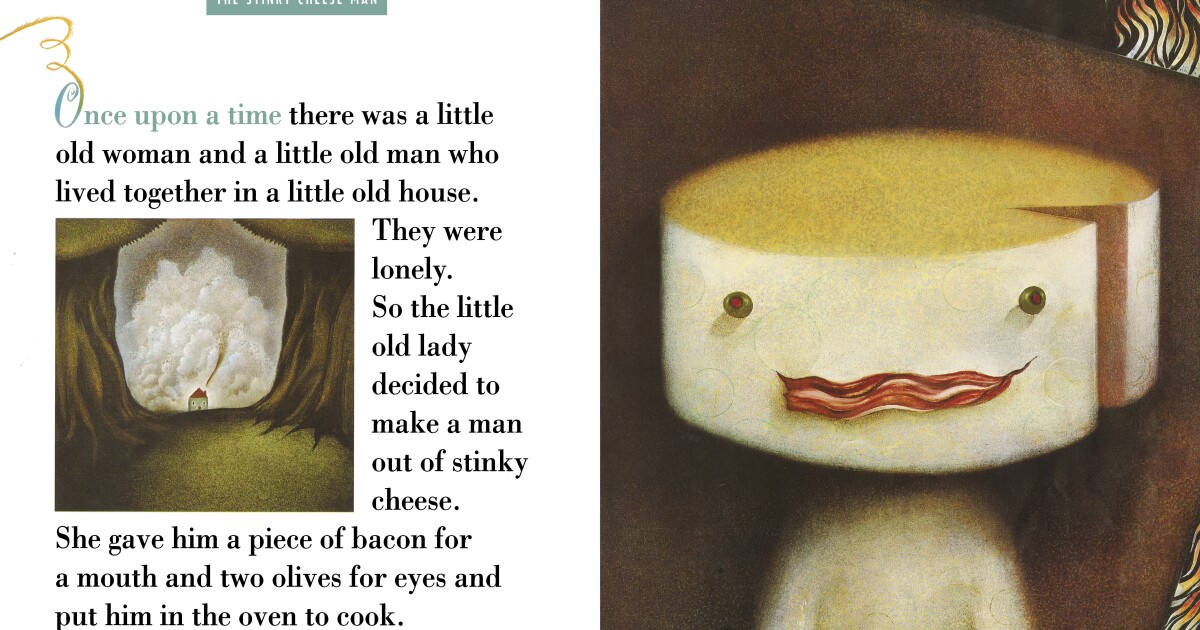 Here’s a story you may know – it’s a classic fairy tale – “Once upon a time there was a little old woman and a little old man who lived together in a little old house. They were lonely, so the little old lady decided to make a man out of smelly cheese.”

It’s Jon Scieszka and Lane Smith’s version The Gingerbread Manwith a very important plot twist – the stinky cheeseman is so stinky that no one wants to run, run, run after him, let alone eat him.

It is the cover story of her 1992 children’s book, The Smelly Cheeseman and Other Pretty Stupid Stories. Some of the other “pretty stupid stories” in the award-winning collection:

“I tried to sell children’s books,” says Scieszka. “Not having much luck.” His wife, Jeri Hansen, said, “Oh, you should meet this guy who just did some art for the magazine.”

The guy was Lane Smith, who got a job Sports from his then girlfriend Molly Leach.

It was love at first sight – for Scieszka and Smith.

By that time, Scieszka had completed his master’s degree in fiction, done some apartment painting (“Because that’s about what you can do with an MFA, where he was exposed to some really awful kid reading material.

“My second graders said, ‘Mr. Scieszka, why are we even reading this?’ ”

So he started trying other materials.

“Like ‘Hey, have you ever heard that story about a guy who woke up one morning and was a bug?'”

The second graders were very taken with Franz Kafka. He read them george and martha and frog and toad – anything but the leveled readers.

When Scieszka and Smith met, they shared a love of high culture, art and literature, but also pop culture.

“I brought all my favorite fictional devices and books that I loved – metafiction – stuff like Tristram Shandy,” says Scieszka. “He brought this wealth of experience from the art world, just pure art. It seemed to fit together so well.”

For her second book, Scieszka decided to take a bunch of other fairy tales and deconstruct them completely.

Once they had the idea, they had to make everything meaningful. They had a big bulletin board in Smith’s studio. Scieszka came over and they did a storyboard together.

“We just rearranged things and rearranged things and said, ‘Well, how about we start with this one.’ And then we put this at the end. And maybe this character could come out of this story and go into this one,” says Smith. “It was one of those lucky things. One day we looked at the big board and everything worked.”

The narrator of the book is Jack – known from Jack and the Beanstalk – but here he writes the introduction (“You should definitely read the stories now, because the rest of this introduction just keeps going”). He interrupts Chicken Licken to tell the reader that he forgot to include the table of contents, which falls from the sky.

Smith’s wife, Molly Leach, helped them with many of the book’s design elements. The table of contents is all crumpled up on the page after falling from the sky. Smith and Scieszka wanted all words to run off one of the sides. Leach instead suggested what if the words just got smaller and smaller and smaller?

“It looks like it came out of magazines,” says Smith. “It was like something I did for Rolling Stone.“Smith did all of the illustrations by hand, using a lot of collage elements.

For example, in the story of the really ugly duckling, the duck is very cartoonish and stylized, but around it are clip art and vintage engravings of real ducks, geese, and mallards. It’s a nice contrast, Smith says, to have something crazy alongside something scholarly.

The constant in all his work, says Smith, is texture.

“I used thin layers of oil paint and then sprayed it with a water-based varnish,” says Smith. “And I would get out a hair dryer and blow it. And he would dry him immediately and the color would strike. But I would just build up layer by layer of oil… move the paint around with my fingers.”

“I think the short answer for Lane’s technique is that it’s illegal now,” says Scieszka.

Scieszka says people jokingly ask him what he and Smith were smoking (paint fumes, it sounds) all the time while making this book. Despite all the fun they had — including with the ping-pong table in the studio — it really was a lot of work, he says. And being in the room together was important.

“It’s a give and take of both arts to tell the story,” says Scieszka. “It’s not just about adding pictures later.”

What was truly unique at the time the book was published, says Smith, is its sophistication The smelly cheeseman is – and that it was a parody book for children.

“Until then, parody, like Tex parodying Avery in an animated film, was almost more adult-oriented,” says Smith. but The smelly cheeseman didn’t wink at the adults. “Every child had read The Gingerbread Manso if you say the stinky cheeseman, they get the joke.”

“These are stories that have been around for hundreds of years,” says Scieszka. “And you tweak them just a little bit for this new audience and they can make you laugh.”

And Scieszka and Smith say that’s the whole point – they never wanted to write a news book, just a funny one.

“Sometimes I get an email on my website from people saying that a book I wrote offended them in some way. And: ‘Why did you write that?’ ‘ says Smith. “And I’ll say, ‘Well, I didn’t write it for your kid!’ You know, I only wrote it for like-minded people who will find it funny.”

“I think that’s always been another commonality, that we don’t want to tell kids what to think,” says Scieszka. “You read it. See what you think. See what comes out of it.”