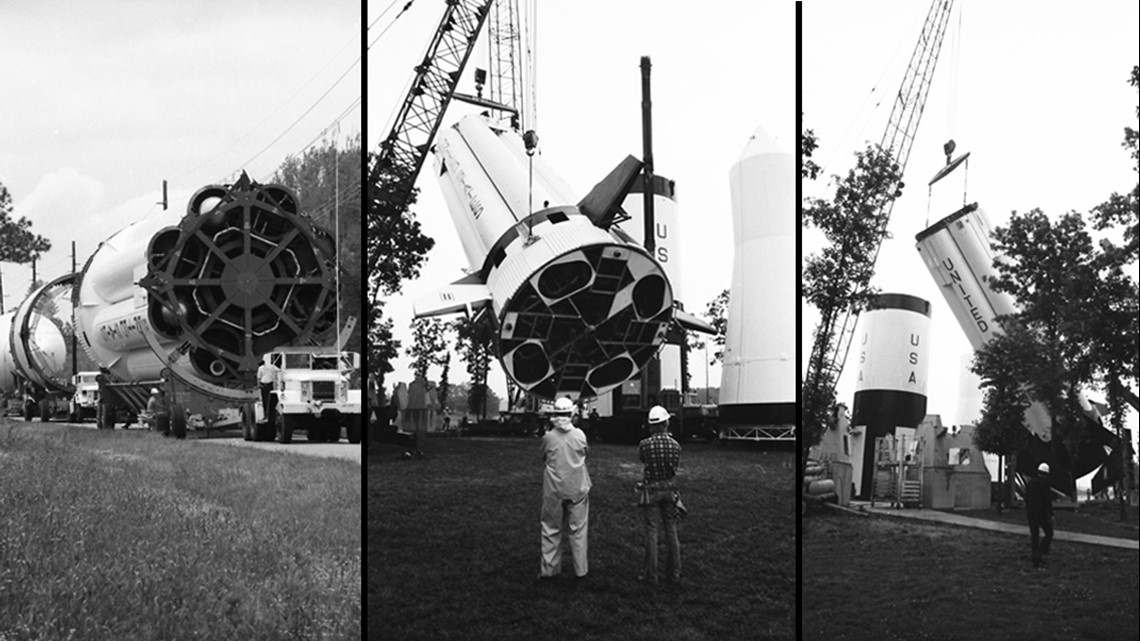 Safety concerns about the aging rocket mean it will soon go down in Alabama lore.

ELKMONT, Ala. – If you’ve been driving I-65 to or from Alabama, chances are you’ve seen a large, black-and-white rocket standing guard at the side of the road. It has been a landmark at the Alabama-Tennessee state line at the Alabama Welcome Center for nearly 44 years.

Soon it will come down and go down in Alabama history. The decision came with input from multiple organizations and not without much public comment.

The US Space & Rocket Center and NASA agree that leaving the aging rocket in place could be a safety hazard. It was not designed to withstand outdoor exposure and “critical structural elements” have deteriorated beyond repair. And moving it would be very difficult as it cannot go under flyover bridges or go on other tracks. It was estimated that dismantling and reconstruction would cost more than $7 million, with no guarantee that the aging icon would survive the process.

And repair? Well, it would require experts working full-time for more than a year… and wouldn’t change the fact that the rocket isn’t designed to withstand years of exposure.

No date has been set for the removal, but you might not want to wait to wave hello… and goodbye… to the once-mighty rocket, an icon of Alabama’s contribution to infinity and beyond.

See how it all started


Click here for more photos of the rocket’s history.

Who is involved in the project?

NASA owns the Saturn 1B, which “was one of three launch vehicles in the Saturn family and served as a testbed for the Apollo lunar program.” It was used to launch Skylab astronauts into orbit and last flew in 1975.

The Welcome Center is located in Limestone County. District Commission Chair Collin Daly says, “After meeting with NASA and the US Space & Rocket Center, I am 100 percent confident that we can work together to find a solution that reflects the voices of the citizens of Alabama and… honors the legacy of those who took us to the moon.”

State Assemblyman Andy Whitt, chairman of the House Committee on Economic Development and Tourism, wants to see a new landmark that “will stand the test of time and serve as a symbol of Alabama’s past and present role in space and technology.”

dr Kimberly Robinson, CEO and Executive Director of the US Space & Rocket Center, said, “We are inspired by the community’s passion for the rocket and the achievements it represents. Whether the rocket is replaced with a Saturn IB replica or another rocket, we are excited at the opportunity to create a new enduring landmark of Alabama’s leadership in space exploration.”