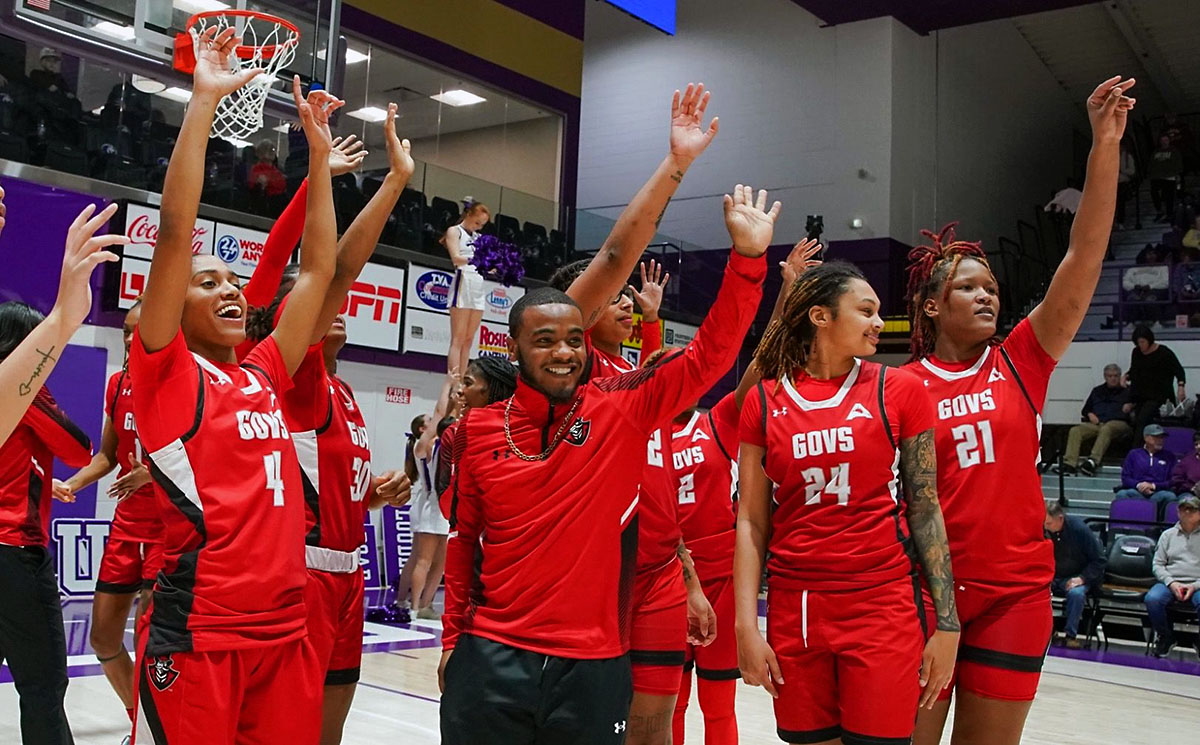 Florence, AL — A career-high 22 points from Shamarre Hale led the Austin Peay State University (APSU) women’s basketball team to their fifth straight win at the ASUN conference in a 61-52 win over North Alabama at Flowers Hall on Saturday. The governors now sit tied for first place in the ASUN standings.

Hale led Austin Peay (11-6, 6-1 ASUN) for the third time in four games as the Govs secured their longest winning streak since 2017.

North Alabama (7-11, 2-5 ASUN) scored the first points of the game with a three and took an early lead, but it was the only time the Lions faced APSU, who led for nearly 38 minutes in Saturday’s win , were at an advantage.

Yamia Johnson answered UNA’s quick score with a three of his own to level the game after 90 seconds, while Gabby Zapata Smalls’ first basket of the game gave the Govs their first lead of the afternoon.

A three-pointer from Tiya Douglas gave APSU a five-point lead with 6:12 in the first quarter, a lead it held into the frame’s media break.

It wasn’t long before the Governors had a double-digit lead as they soon found themselves down to 10 after a steal turn layup by Hale and Douglas’ second triple of the night.

A pair of UNA free throws with 1:27 remaining were the final points for both teams in a first quarter in which the Govs made eight of their 13 shots from the field and three of their four three-pointers.

Austin Peay State University converted eight turnovers into as many points in North Alabama in the first quarter and led 24-16 in the second quarter.

Jada Roberson scored the first two baskets of the second quarter and gave the Govs a game-high 12-point lead, but the Lions responded with a 6-0 run and were just five behind by the end of the quarter after losing 58.3 percent of their shots had submitted within the framework.

Hale led all scorers with nine points and four rebounds at halftime, followed by Roberson’s eight.

North Alabama opened the second half with an old-fashioned three-point game to reduce their lead to 37-35. It was the first time since the 6:27 mark of the first quarter that the two teams were within a point of each other. Austin Peay responded with a 9-2 scoring run that was topped by Hale with five straight points.

Hale’s final score of the run, her first of two conversions and one opportunity, came at 5:04 in the third quarter and was both teams’ final score for more than three minutes. A layup by the Lions and a three-pointer ended the game’s points drought, tying it at 44 with 1:30 remaining. Hale split two tries at the charity strip to give APSU a 45-44 lead in the last 10 minutes of the game.

Hale opened the second quarter with another layup and made the line to give the Govs a four-point lead. The Govs and Lions traded points after the media break and were just two points apart after UNA’s Alexis Callins made a layup with 2:56 left

A layup by Roberson while driving was met with a Lions free throw to put the game 56-52 in the Govs’ favour, with 2:07 remaining on the rule.

A layup by Hale followed by a trio of APSU free throws sealed the win for the visiting governors, who were locked in a three-way tie with Florida Gulf Coast (18-3, 6-1 ASUN), Austin Peay and Lipscomb (12- 7, 6-1 ASUN) for first place in the ASUN ranking.

Shamarre Hale (Yes, again. And no, I’m not sorry.). Hale’s 22 points and nine rebounds were both more than North Alabama’s top two scorers and rebounders…combined.

In the box score

The APSU Govs also improved to 4-0 in the Saturday games this season.

For the second time in four games, Shamarre Hale scored a career-record 22 points.

Hale’s 22 points is the second-highest by a governor this season, while her nine rebounds are the fifth-highest.

Austin Peay State’s 6-1 start to the ASUN game is its best start to conference action since an 11-1 start to OVC action in the 2003-04 season.

The APSU Govs’ five-game winning streak is the program’s longest since a seven-game streak from November 14 to December 5, 2017.

Austin Peay State’s 24 points in the first quarter is the third most points in a quarter this season and most in a quarter since their 25th goal in the fourth quarter against UNC Ashville on December 21.

After Liberty upset the championship leader on Florida’s Gulf Coast

corner of the coach

General Thoughts… “We’re growing up a bit. I told the team that we’re not going to get a lot of calls in a game like this in an environment like this. North Alabama’s style is so drastically different, and that’s why they’re going to be in every ball game they play. Overall, there were two opposing styles and one style had to prevail. And you see they scored 52 points and that was our style and pace and it showed.

In defense this season… “We put our heads down and take it one day at a time and try to trust the process. We have many areas that we can still improve. As I’ve said to these young ladies, it doesn’t always have to be perfect, sometimes you wish for those Cinderella fairy tale seasons, and while it still can be, it might not turn out exactly as we expected. The season is full of ups and downs, ups and downs, but if you persevere and keep your composure and work through both the good days and the bad, something special can happen.

To the team that never lags behind after the first goal of the game… “That is resilience. We talked about it before the game, you can’t be emotional about it [UNA] will make three. I’m glad we kept them at five… One example of how we kept our composure was when two of their players set up an umbrella and I thought we had it perfectly guarded, but they knocked it over us anyway . We got back to the group and made sure they were still locked in and they just said to us, ‘Hey, we were there.’ That kind of composure where you don’t go under on certain shots or runs – you find a way to counter and hit back, and we did that.”

On the ASUN rankings.… “We were ninth in the preseason poll mainly because I didn’t vote for us. I wanted bulletin board material. These young ladies can’t worry about preseason placements because it means nothing. The pre-season ranking means nothing. The rankings you want to take care of are the final ones. It doesn’t matter where we are right now. I don’t want them to think about where we are because then we’re going to miss our target. All we can do each week is double up, get two wins and be ready for the next game.”

Next for APSU women’s basketball

The Austin Peay State University women’s basketball team returns to the Winfield Dunn Center Thursday at 6 p.m. when it hosts Liberty for “We Back Pat Night.”