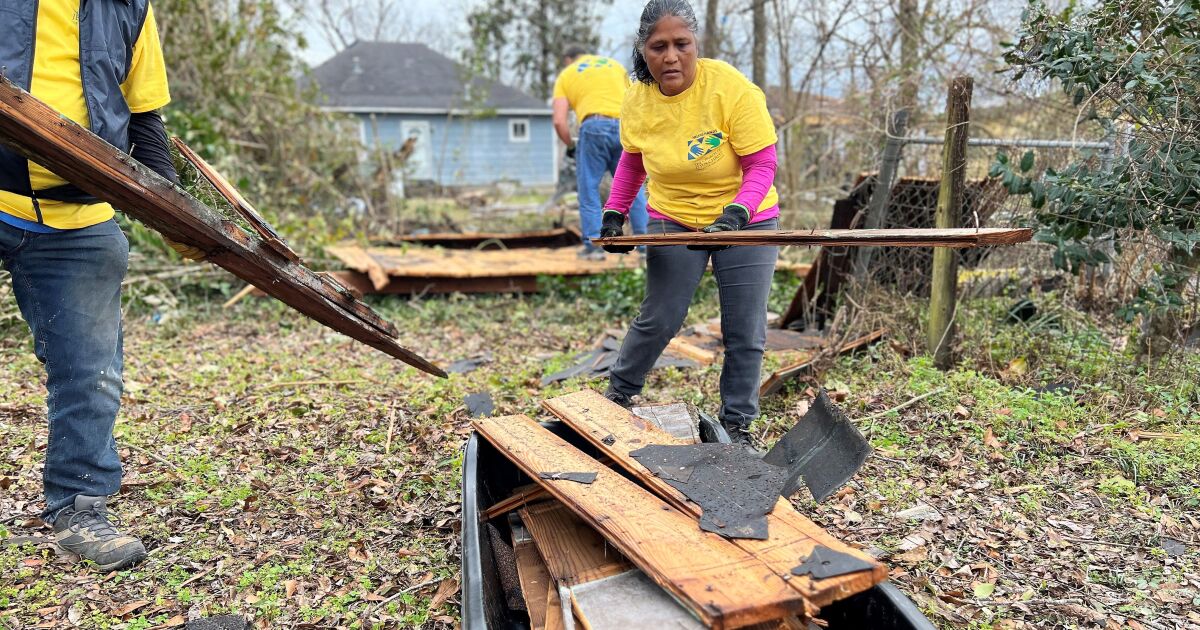 Ten days after a severe storm system sent 34 tornadoes through the southeastern United States, members of The Church of Jesus Christ of Latter-day Saints mobilized to help their neighbors clean up all the damage.

Tornadoes were recorded on January 12 that started in Alabama and continued into Georgia. At least nine people were killed, and houses, cars and trees were destroyed in several counties.

On January 21 and 22, separate cleanups in Selma, Alabama, and Griffin, Georgia resulted in 1,154 volunteers from nine stakes clearing fallen trees, branches, and debris on multiple properties, unloading and bagging Church food donations, and ministering to people in distress.

854 volunteers from seven Alabama stakes gathered with the help of a disaster relief command center in Prattville to serve the town of Selma. Many volunteers traveled long distances and camped at the Prattville YMCA.

Tornadoes with wind speeds between 113 and 157 miles per hour had hit the area. Montgomery Alabama Stake President Jared D. McLaughlin said the volunteers’ hearts were heavy as they witnessed the destruction.

“We’re just trying to do whatever we can and instill the confidence in those who need it most,” President McLaughlin said. “We serve because we are the hands and feet of Jesus Christ. When others are in need, we can offer some hope and relief.”

His First Counselor, President Gregory R. Spears, shared his feelings as he worked on the cleanup.

“We have felt the Savior’s love as we ministered to those affected by the storm. We hope they find hope as they see those around them working to get them out of this very difficult time,” said President Spears.

“We want to provide service and really reach out to those affected and serve them. We have a strong feeling that Jesus Christ would do just that, and we are trying to follow him.”

In total, the volunteers put in 11,709 hours and completed 381 jobs in homes and places of worship, clearing debris, removing fallen trees and covering damaged roofs with tarpaulins.

The church sent £40,000 of groceries to the Selma Area Food Bank to help those in need in the wake of the storms. Volunteers packed 244 food boxes from an additional food donation from the church so work teams could deliver to local families. Remaining supplies were donated to the Volunteer Resource Center in Prattville.

More than 300 volunteers from the Fayetteville and Newnan Georgia Stakes served in more than 14 locations throughout the city of Griffin.

Most of their work consisted of picking up trees, branches and debris. They also helped remove a large tree that had fallen in the graveyard at Mt. Pleasant Baptist Church in Griffin.

“Our hearts and prayers go out to everyone affected by the recent tornadoes in our community,” said Robert G. Richards, Fayetteville, Georgia stake president. “We are also grateful that we were able to offer a hand of service and provide assistance where and when it is most needed.”

David Nielsen, a member of the Brooks Ward Fayetteville Stake, said his heart is always with those who are struggling to see their homes or yards destroyed.

“I’m glad I can devote some of my time to helping when it means less for them to worry. I feel sadness, peace, joy and tiredness all at the same time and I try to imagine what it would be like to be someone in this situation and have people come and help,” Nielsen said. “I feel the Savior’s love for them. [I] I never regret giving up my time to help with disaster recovery.”

“Realizing that I was the answer to someone’s prayer made me feel like I was on the Lord’s behalf,” he said. “My heart was full and I made friends that I wouldn’t have if I wasn’t offering service today.”

Mike Donaldson of the Fayetteville Ward said many hands were made for light work.

“It was amazing that we were all able to get to work so quickly,” he said. “We all worked in unison and harmoniously. By noon we had completed the clean-up work. It was a great testament to the selflessness of everyone involved.”