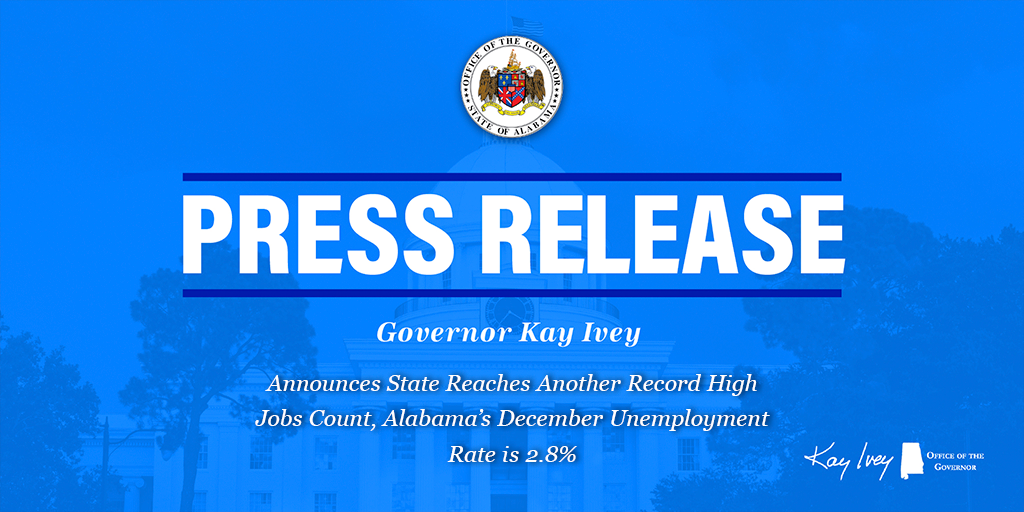 Montgomery – Governor Kay Ivey announced today that Alabama’s interim seasonally adjusted unemployment rate for December was 2.8%, slightly above the November rate of 2.7% and well below the December 2021 rate of 3.1% lies. The December rate represents 63,412 unemployed, compared to 63,004 in November and 69,434 in December 2021.

“As we finalize our 2022 economic coverage, I am pleased to say that Alabama has recovered well from the pandemic and has maintained positive momentum throughout the year.” said Governor Ivey. “We broke records all year reminding everyone that Alabama is the best place to live, work and start a business. Our wages have risen, jobs are plentiful and growing, and we are seeing some of the highest employment numbers in key sectors in more than a decade. I couldn’t be prouder of the progress we’ve made.”

“Our economy supports more jobs than ever before, with nearly 56,000 jobs added since last year,” said Secretary of Labor Fitzgerald Washington of Alabama. “This translates to job growth of 2.7% for the year, which, barring the immediate recovery from the pandemic, is one of the highest job growth rates in more than 20 years. We also have record employment in trade, transportation and utilities, and since 2008 more people are working in manufacturing and construction.”

“Seasonally adjusted” refers to the BLS’s practice of anticipating certain trends in the workforce, such as hiring during the holidays or increases in the workforce as students graduate in the spring, and extrapolating their effects to the civilian workforce.

The Current Population (CPS) or household survey is conducted by the Census Bureau and identifies the members of the labor force and measures how many people are working or looking for work.

The business survey, conducted by the Bureau of Labor Statistics (BLS), a division of the U.S. Department of Labor, surveys employers to measure how many jobs are in the economy. This is also known as wage and salary work.