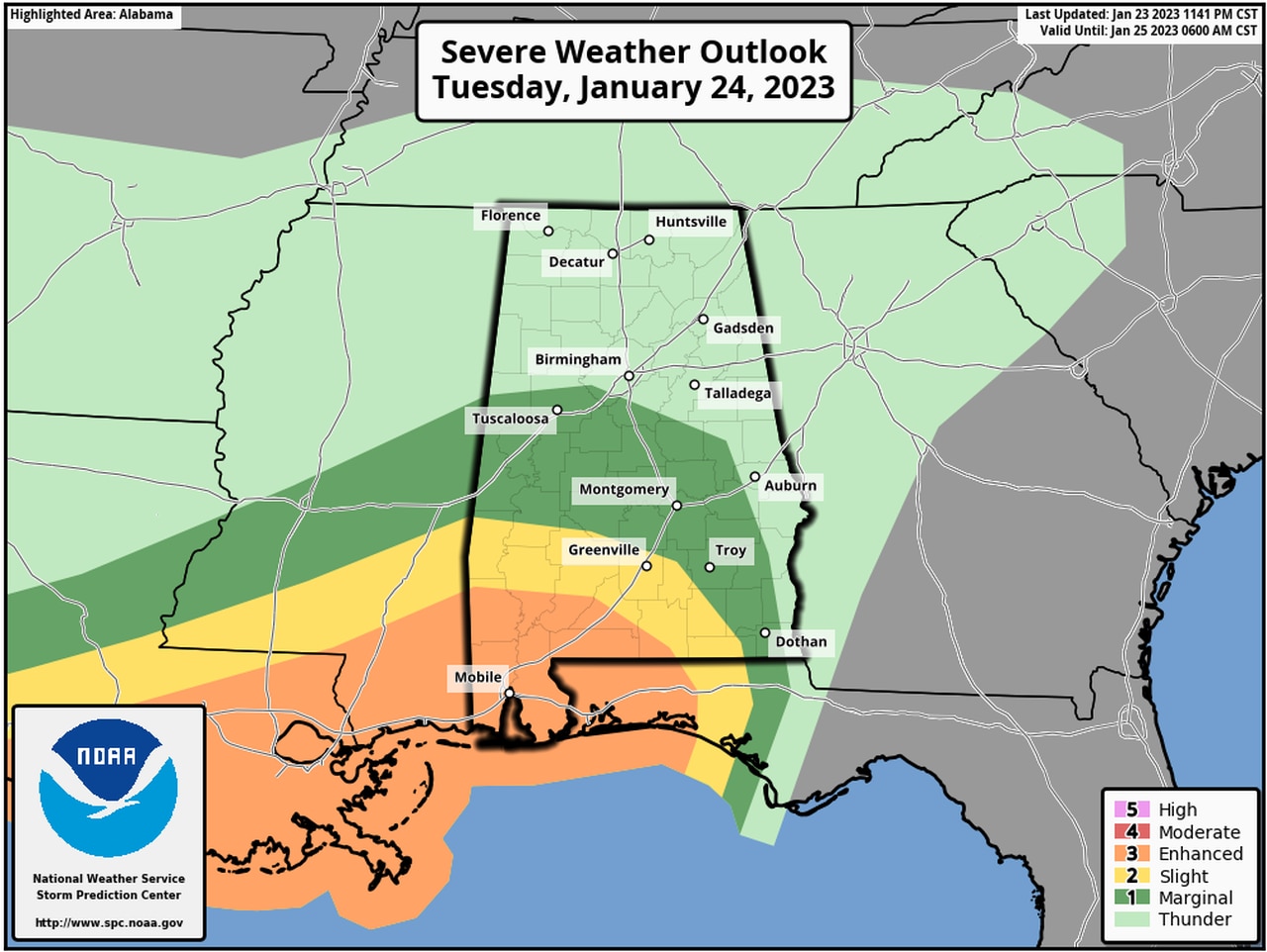 Tornadoes — including some strong ones — can also cause damaging winds and heavy rain ahead of a cold front.

The most likely time for severe storms begins around 11 p.m. in southwest Alabama and moves east of the Interstate 65 corridor in southern Alabama after midnight, according to the National Weather Service.

Apart from the storms, it will also be very windy. Wind warnings have been issued for the entire state, and Southwest Alabama is under a rarely used high wind watch.

Such strong winds can knock down branches – and power lines.

The National Weather Service warned those in southern Alabama to prepare now for what could come later today:

“There is a possibility of numerous trees falling throughout the area along with downed power lines and blackouts. Given the nocturnal nature of this system and the higher potential for power outages ahead of the approaching storm, it’s important that you have MULTIPLE opportunities to receive alerts to wake you up. Make sure at least two ways are battery powered and have batteries charged, including phones and weather radios.”

Rain and storms are possible throughout the day today, according to forecasters, but the severe weather threat is not likely to start until later at night. And storms in eastern Alabama are expected to continue through Wednesday.

NOAA’s Storm Prediction Center maintains a Level 3 out of 5 — or increased risk — for severe weather for the southwest portion of the state, including Mobile, today.

A level 3 risk means that numerous severe storms will be possible.

Areas north and east of the Level 3 risk area, including places like Andalucia, Monroeville and Evergreen, have a Level 2 risk. A Level 2 risk means isolated severe storms are possible.

All of Alabama will see rain and maybe a few storms later today. But the northern part of the state is not expected to have to deal with severe weather.

The National Weather Service is monitoring a warm front and a cold front today. Both are key players when it comes to who gets bad weather and who doesn’t.

The warm front is expected to rise north from the Gulf and into southern Alabama today. The weather service expects the warm front to stall somewhere in south or south-central Alabama.

Areas south of this warm front will be in an area more favorable for severe storms.

Areas north of the front are unlikely to experience severe weather.

Storms could also form along the warm front as it pushes north today, forecasters said.

Then, later in the night, a cold front will approach Alabama from the west. A number of storms are expected to arrive before then, and those storms are the ones that can cause severe weather, weather forecasters said.

The line is intended to traverse the state from west to east.

Parts of eastern Alabama will face severe storms on Wednesday.

The Storm Prediction Center added a Level 2 out of 5 risk of severe storms for the southeast corner of Alabama for Wednesday as the line advances farther east.

Here are the storm forecasts for Wednesday:

The storms are expected to move out of Alabama on Wednesday, and drier and cooler weather is expected across the country beginning Thursday and continuing through the weekend.

The Mobile Weather Service said southeasterly winds of 20 to 30 mph will be possible starting Tuesday afternoon, becoming 25 to 35 mph from the southwest Tuesday night. Gusts of up to 50 km/h possible.

* High crack current risk: Along the beaches of Alabama through Wednesday afternoon.

* Flood warning on the coast: For Mobile and Baldwin counties Tuesday 9pm to Wednesday 9am.

* Wind notice: Covers all of central Alabama Tuesday 9pm through Wednesday 3pm. Sustained winds of 15-25mph with gusts up to 40mph are expected.

* Wind notice: For all of North Alabama from 9 p.m. today through 3 p.m. Wednesday. South winds expected 20 to 30 mph with gusts of 40 mph or more. At higher altitudes, gusts of up to 80 km/h are possible.