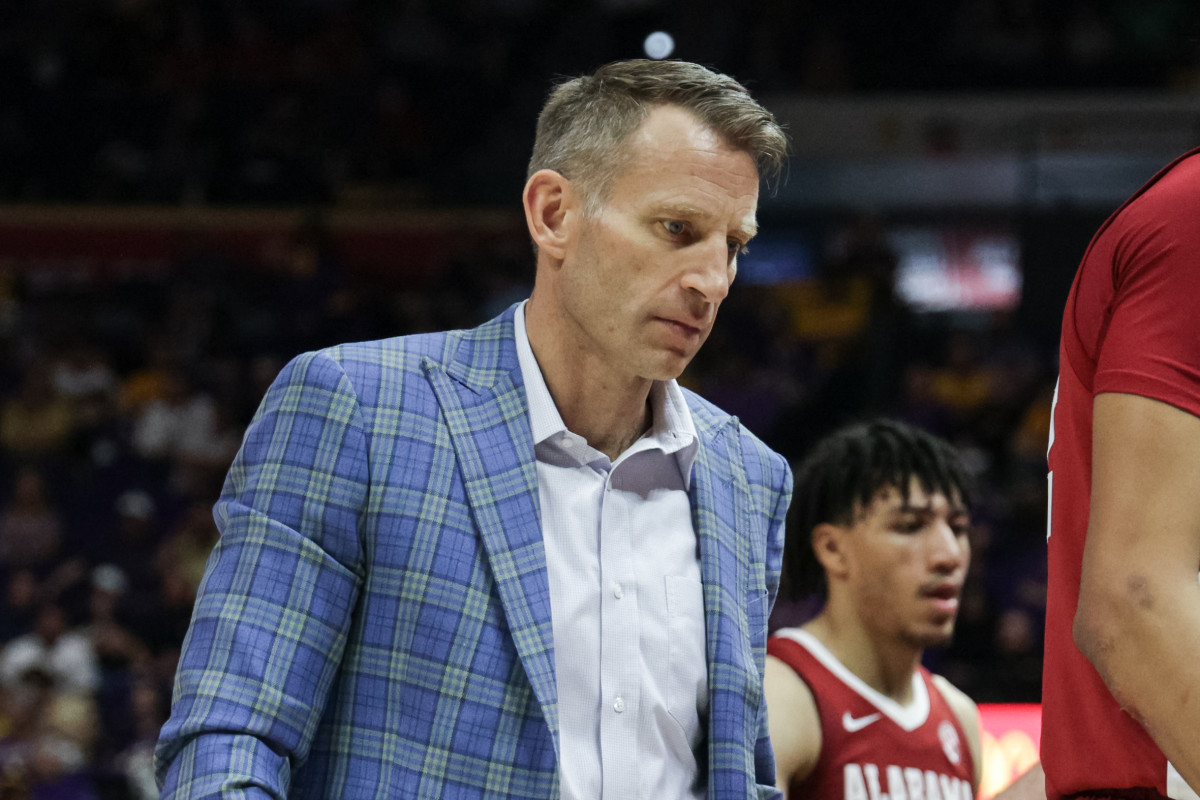 “And we know that all things work together for good to those who love God, to those who are called after him His Purpose.”—Romans 8:28 (NKJV)

The morning of January 15 did not start in a typical way for Alabama basketball head coach Nate Oats.

His typical Sunday morning routine consists of breakfast and then getting ready to go to church with his wife and three daughters. After church comes preparation for the team’s next game, including film studies, meetings with assistant coaches, and afternoon practice.

For Oats, however, his Sunday was completely derailed by a phone call.

“I got a call on Sunday morning alerting me to what was going on and I called Greg straight away [Byrne]and we have begun to put our plan together to deal with situations like this,” Oats said.

Darius Miles, a junior forward for the Crimson Tide, had been arrested and charged with capital murder. Another man with no connection to Alabama, Michael Lynn Davis, was also charged and subsequently arrested. While details have emerged since that time that have brought greater clarity to what happened in the situation, the way Oats felt at that moment will never change.

There are many things a coach can never prepare for. Player and family member deaths and illnesses are some of the business a coach must prepare for but hopefully never experience. Regardless of how willing a coach can be to handle a situation, it always comes as a shock.

It was no different with Oats. A 23-year-old mother in Jamea Jonae Harris was dead, leaving her five-year-old son Kaine. Regardless of how he handled the matter, those were the facts, cold and simple.

Miles was immediately removed from the team and expelled from the University of Alabama. Within hours, his player bio was removed from the Crimson Tide website. All records of Miles ever visiting Alabama have been seemingly erased.

But just because a person’s records are removed doesn’t mean memories and pain go away. And for Oats, coping had only just begun.

The typical team briefing was postponed until Oats and his staff could provide solid answers to their players. At the meeting, the players opted to cancel practice that day – many of whom had not slept since first learning of Miles’ arrest.

On Monday afternoon, Oats held his scheduled pre-game press conference. Did he have to moderate the press conference? No, and it would have been perfectly understandable if the Crimson Tide had chosen to skip this week’s media meeting. However, Oats went to the booth and in the crowded media room delivered a message not only to those in attendance but also to the fans and everyone out there who is grieving at the situation.

“I have three daughters,” Oats said. “I thought about how easily it could have been a difficult situation for me. I spoke to Darius’ mother several times yesterday – in both cases a very difficult situation. We just keep praying for Jamea and her family. I didn’t know them but they are certainly in our thoughts and prayers. And we continue to pray for Darius’ situation.

“It’s just an unfortunate incident that I wish we didn’t have to deal with today.”

thoughts and prayers. These words are associated with almost every tragedy, no matter how big or small. While some might see the phrase as cliche lately, the sentiments behind these three words are still often used with sincere consideration for those in need.

Thoughts and prayers were needed for the Oats and Alabama basketball. Not just for Harris and her family, but for herself.

However, the team had to move on quickly. And along the way, the team traveled to Nashville, Tennessee to face their next opponent in Vanderbilt on Tuesday night. The game was obviously emotional for the Crimson Tide, even after they defeated the Commodores 78-66.

“I didn’t necessarily see a lot of emotion before the game,” Oats said. “I saw some guys collapse after the game. I think they bottled some stuff. We have a job to do. We have to go to the game almost like a big relief. The game is over and we could breathe a sigh of relief. But I think the guys still needed some time.

“You will need a lot of time. The boys have used the resources with the school and counselors. I think more of them will see some consultants tomorrow. But it’s a tough situation for guys to go through. I thought guys locked themselves in ready to go. It’s almost like we use basketball as a bit of relaxation, if that makes sense. And then I just think after the game it got a little bit more emotional than before the game.

Shortly before Alabama’s game at Vanderbilt, Oats said he reached out to former NFL linebacker Ray Lewis for advice on the situation. While in the NFL, Lewis was arrested in January 2000 along with two other men charged with the murder of two men who were stabbed to death outside an Atlanta nightclub.

Lewis’ murder charge was dropped months later after he pleaded guilty to obstruction of justice. The other two accused were later acquitted.

Oats said he contacted Lewis through his daughter, Diaymon Lewis, who recently graduated from Alabama. During the phone call, Oats said Ray advised him to share the Bible and pray with his players.

“The passage read, ‘For those who love God, all things work together for good,'” Oats said. “It obviously doesn’t look like there’s anything good in it, but we’re trying to use it to bring the team closer together. It’s a tragic situation. We feel terrible for any part of what anyone in our program had to do with it, but we’re trying our best to learn within the group and make better decisions.”

The verse quoted was Romans 8:28, a verse often used by Christians in times of trouble or when a tragedy may have no explanation. In Paul’s letter to the Romans, the verse speaks not only to the good in the present life of Christians, but ultimately also in life afterward—that whatever happens to you, God can use it for the eternal benefit of Christians. This can either be to rescue those suffering tragedy or to send them through tragedy to bring them closer to Him.

And during the time of crisis and tragedy in Alabama basketball, Oats took the verse and shared it with his team.

Whether you believe in the Bible or not, Oats sharing scriptures with the team had a profound impact. And the sharing of verses didn’t stop on Tuesday.

During his Friday press conference ahead of the team’s trip to Missouri, Oats revealed another Bible story he had shared with his team.

“I read the boys a passage about Joseph from The Word this morning,” Oats said.[…] Different guys handle things differently and guys who were closer to Darius obviously take it a little harder, but I think overall the team – sometimes you use those instances to bring a group closer together.

“I think our guys need to be closer because of what they’ve been through.”

In the book of Genesis, Joseph was beaten and sold into slavery by his brothers. Then he was thrown in prison on false charges. After years in prison, he was released and taken to Egypt to meet the pharaoh, where he eventually became one of his most trusted advisers and helped save the nation from famine.

His own family was among those saved. What His brothers originally intended for evil, God used for good (Genesis 50:20).

Last Saturday, Alabama faced Missouri. In his three games against the Tigers in ‘CoMo’, Oats and the Crimson Tide hadn’t brought home a win. However, the narrative changed that day when Alabama defeated Missouri 85-64. The win put the Crimson Tide up 7-0 in SEC play and a 17-2 overall record in the season.

After the game, Oats said he couldn’t be prouder of the mental toughness his team displayed not just during the game but throughout the week.

“Really proud,” said Oats. “A lot of mentally strong guys who can focus on what they need to focus on and still have compassion for the whole situation to be honest. I think our guys kind of bonded even before the game. Noah Gurley leads the team in prayer. We prayed for the people involved in the situation and prayed that we could focus and I think they did a good job.”

Alabama basketball still has a long way to go before completely removing itself from the situation. For the remainder of the season, Miles’ actions – whether found innocent or guilty at the end of the trial – will follow the team wherever they go.

However, Oats is aware of this and has taken all precautions. His leadership over the past week has laid a solid foundation for helping his players navigate the battles. Whether through pastoral care, counseling or prayer, ways were shown to deal with the shock and grief arising from the situation.

For Alabama, no coach could have handled the ordeal with more grace than Oats. He never shied away from a question, a press conference – anything. And answer after considered answer, he proves why he should be the coach of the Crimson Tide.

On-court performance and results often overshadow the character and leadership of coaches, but for Oats, he’s done both in his first four seasons at Tuscaloosa. With the potential of a new arena and the burgeoning Crimson Tide Hoops brand, Oats can continue to be an integral part of the team’s growth – not just on and off the pitch.

allowed to continue to be an integral part? no Should still an integral part. Coaches like Oats don’t come around often, and the Alabama Athletics leadership should definitely take note of the jewel they currently have as coaches of Crimson Tide Basketball.

A Week The Alabama Crimson Tide Will Never Forget: All CW

No. 4 Alabama doesn’t have to rely on Brandon Miller every night