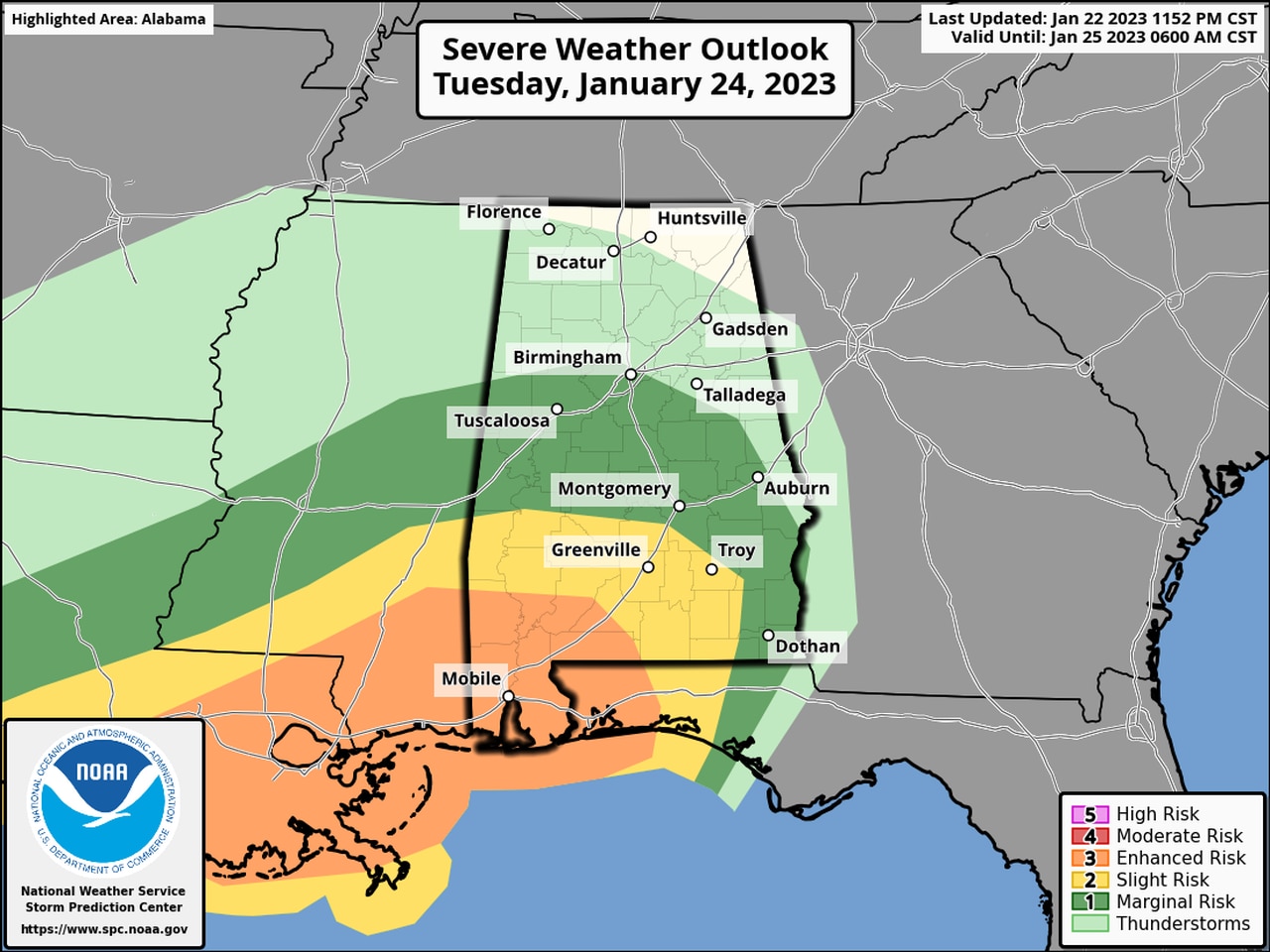 Confidence has increased slightly in the potential for severe weather in southern Alabama from Tuesday night through Wednesday morning.

The National Weather Service warned of the potential for “significant” severe weather in southwest Alabama and said all forms of severe weather will be possible for southern Alabama beginning Tuesday night.

Tornadoes, gusts of wind up to 70 miles per hour and heavy rain will be possible in this part of the state ahead of a cold front.

NOAA’s Storm Prediction Center has added a Level 3 of 5 risk for severe weather in southwest Alabama — including the Mobile area — for Tuesday evening through Wednesday morning.

A risk of level 3 or increased risk means that numerous severe storms are possible.

Areas to the north and east of this region, including Troy and Greenville, also have a Level 2 risk of severe weather. Severe thunderstorms are possible there.

A Level 1 risk extends further north and east and includes locations such as Montgomery, Tuscaloosa, Birmingham, Auburn and Dothan. A level 1 risk means that isolated severe storms are possible.

The Weather Service also warned it could be windy before the storms hit — and gusts of 50 to 60 mph are not out of the question, particularly in southern Alabama.

Those winds, coupled with recent rains, could cause downed trees and power outages on Tuesday – before the storms hit.

The storms are expected to hit overnight and it’s important to ensure you have multiple opportunities to receive alerts – even when you’re asleep. Don’t rely on an outdoor siren to wake you up, it’s not designed to be heard indoors.

On Tuesday night, make sure devices are charged and not on mute — or have battery-powered weather radios activated.

There’s good news: The National Weather Service in Mobile announced Monday morning that a planned radar upgrade, which was due to begin today, is being postponed in light of the threat of severe weather. The maintenance work will take the radar out of service for more than a week.

The main work on the radar will start on Wednesday instead. However, some preliminary work would take place later today, the weather service said.

For the Alabama coast, the expected strong winds will also result in a high risk of rip currents and could cause coastal flooding Tuesday night through Wednesday morning. Minor flooding is also possible in the Mobile Bay area.

The National Weather Service in Mobile said some showers will be possible in southwest Alabama beginning Tuesday afternoon, but the stronger storms won’t hit the region until late Tuesday evening or early Wednesday morning.

Forecasters will observe two things: a warm front expected to move north through the region from the Gulf, and a fast-moving cold front approaching Alabama from the west.

The Weather Service expects a series of rain and storms to sweep through the state from west to east. The storms are not expected to be violent in north and north-central Alabama, but could be very strong in areas south of the warm front.

The Weather Service said there will be many ingredients for severe weather, but the question remains whether there will be enough instability to support a widespread severe weather event. Forecast scenarios range from a significant round of thunderstorms to hardly any.

Forecasters will get a clearer picture of expected instability on Tuesday.

Storms are expected to move out of Alabama during the day on Wednesday, and cooler and drier weather is expected through the weekend.