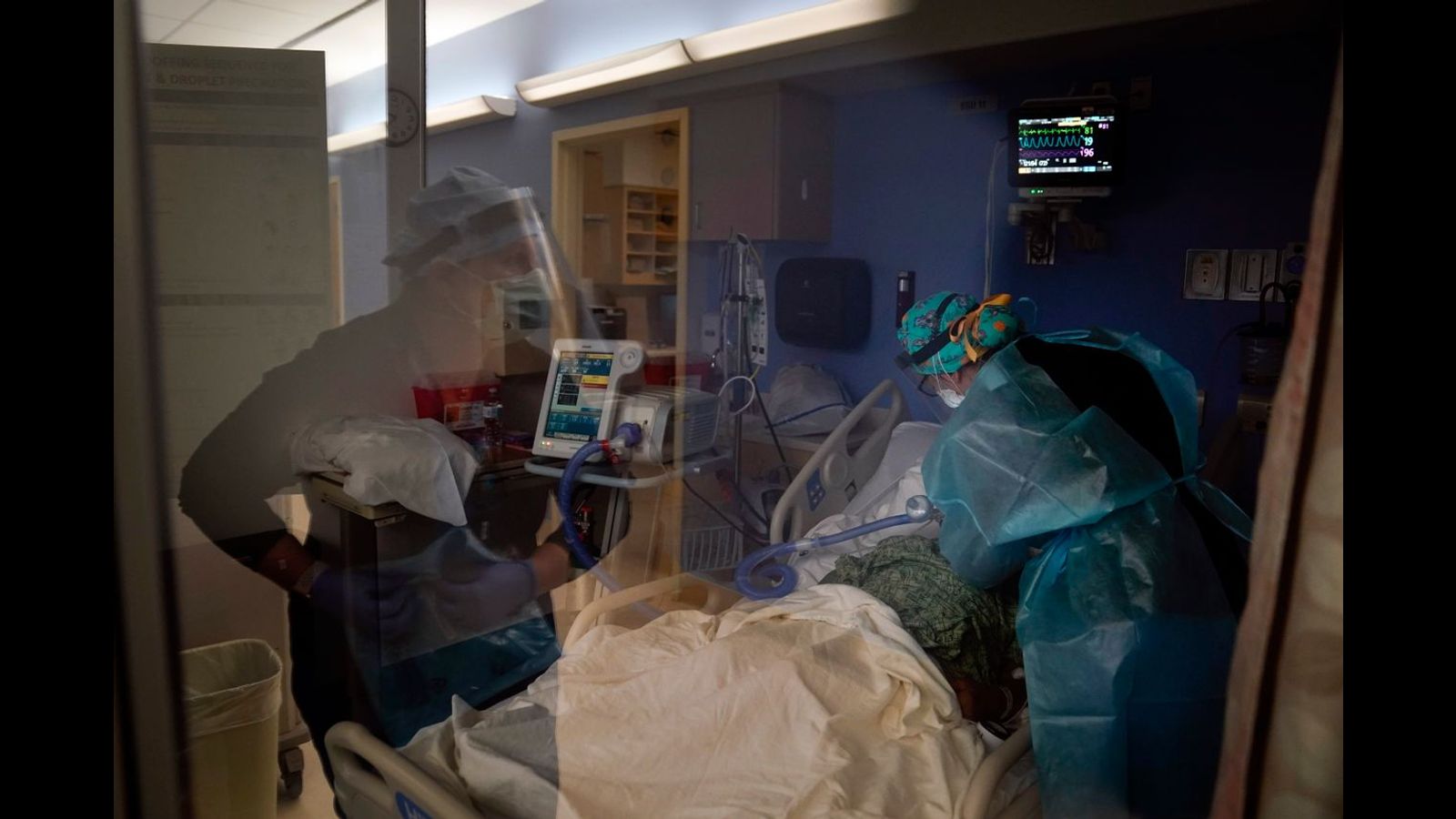 Throughout the coronavirus pandemic, the United States government has been on the front lines of downplaying the seriousness of the deadly disease and allowing the virus to spread, initially by promoting the pseudoscience of “herd immunity” and the Back to School/Workplace campaign and currently the absurd Spreading lies that “the pandemic is over”. As a result of these bipartisan policies, COVID-19 has been allowed to mutate into more virulent, infectious, and vaccine-resistant strains over the past three years.

The newest strain, Omicron subvariant XBB.1.5, accounts for at least 43 percent of all COVID-19 cases in the United States, according to Reuters. In the United States, outside of densely populated areas like Sacramento, California, and New York City, the hardest-hit region is the southeastern United States.

The state of Louisiana is facing a surge in COVID cases and hospitalizations after the holiday. “We certainly saw a bump from the holidays,” reported Dr. Joe Kanter, an official with the Louisiana Department of Health (LDH), on Thursday. “It’s nothing overly dramatic, but no question the transmission has picked up from the holidays.”

Hospital admissions are up nearly 60 percent in the last month, from 289 about a month ago to 456 last week. More than 60 deaths have been recorded in the past seven days, compared with 14 a month earlier. But that hasn’t prompted the state government to take action to shut down non-essential manufacturing and schools, or try to slow or stop transmission.

According to the LDH website, 6,849 new infections and 42 deaths occurred between Jan. 2 and Jan. 8. The total number of registered cases currently stands at more than 1.5 million out of a population of 4.6 million and the total number of deaths in the state is 18,436. According to Kanter, coronavirus infections are distributed “fairly” and “evenly” geographically. Such language, while poor choice of words, indeed demonstrates the intent of the ruling financial and corporate oligarchy to implement mass extinction policies through their back-to-work/school campaigns and vaccine-only strategy. The latter was supported by Kanter and Democratic Louisiana Governor John Bel Edwards.

Currently, the XBB.1.5 subvariant accounts for 17 percent of infections in the region, which includes Louisiana, Arkansas, New Mexico, Oklahoma and Texas. In the Northeastern United States, the variant dominates with more than 70 percent of cases attributed to it. “I would absolutely expect it to be the dominant strand here within two to three weeks,” Kanter said.

The World Health Organization (WHO) has warned that XBB.1.5 is the most “portable” variant yet.

The International Virus Database, known as GISAID, presents data that 10 out of 612 viruses sequenced in Louisiana over the past two months are XBB.1.5. The first case of the new variant in Louisiana was filed on November 11 by Ochsner Health of Orleans Parish. Since then, cases have surfaced in the communities of Plaquemines and Jefferson.

At Children’s Hospital of New Orleans (CHNO), the proportion of pediatric patients hospitalized with COVID-like symptoms has doubled, rising from 1 in 20 to 1 in 10 over the past two weeks, according to chief medical officer Dr. Markus Kline. Just last month, CHNO pediatric emergency departments recorded far higher numbers of influenza than COVID-19, where about 1 in 50 youth tested positive for COVID-19 at the time. “There’s been a steady increase over the last three years or four weeks,” Kline said Times-Picayune. “I think the question mark is: where does it peak?”

The death of a one-year-old child from COVID-19 was announced in neighboring Mississippi last week. Parents are being forced to return to work and children to school amid wave after wave of COVID-19. No matter how many workers and youth become infected and die, production must go on and profits must flow.

According to Kanter, families should make their own assessment of the risk of gathering in large groups — while national COVID-19 data statistics are intentionally atrophied — and get a COVID-19 booster shot if they haven’t already received one. “We’re in Mardi Gras season,” Kanter said, “it wouldn’t be unexpected to see consistent increases.”

There is no attempt by the Democratic Party leadership to prevent state or federal superspreader events, as is the case with their Republican Party counterparts.

In July 2021, Republican Gov. Kay Ivey in Alabama made a strong statement that “it is time to blame the continued spread of the disease on the unvaccinated.” “I want people to be vaccinated. That’s the cure. It prevents everything.” This was a lie designed to make the global pandemic an issue of personal responsibility.

COVID, Capitalism and Class War: A Social and Political Chronology of the Pandemic

Mehring Books, the publishing arm of the Socialist Equality Party (USA), is pleased to announce the release of Volume 1 in epub format COVID, Capitalism and Class War: A Social and Political Chronology of the Pandemica compilation of World Socialist Web Site‘s coverage of this global crisis.

According to August 2022 data from the Centers for Disease Control and Prevention (CDC), about 64 percent (3.15 million people) in the state had received one dose of the vaccine, and 52 percent (2.55 million people) had received two doses and were classified as considered fully vaccinated and 20 percent (970,000 people) had received a booster shot. Over the course of the pandemic, more than 1.6 million Alabamaans have contracted the disease, which has reportedly resulted in more than 21,300 deaths New York Times.

In Alabama, XBB.1.5 accounts for nearly 20 percent of all new cases, according to the CDC. The state is facing an expected spike in COVID-19 infections, hospitalizations and deaths. The Alabama Department of Health (ADPH) reported that 659 people had been infected with COVID-19 in Alabama hospitals as of Thursday. Last week marked the first time Alabama has experienced more than 600 COVID hospitalizations since Sept. 10 last year. Thursday’s number represents a 322 percent increase since just before the Thanksgiving holiday.

About 16.3 percent of people tested for the coronavirus will test positive for the disease. The state health commissioner, Dr. Scott Harris told Alabama Live that Alabamians are at higher risk of long COVID due to a myriad of pre-existing health conditions and low vaccination rates. “To start with, Alabama has a great burden of chronic disease,” Harris noted.

According to the CDC, Alabama, with 12.1 percent of COVID-19 cases, has the second-highest rate of long COVID in the country, behind Kentucky at 12.7 percent. As more resources have been put into studying the impact of Long COVID, it has been divided into four types.

A study published in Nature Medicine last month identified the most prevalent subtype of Long COVID. Cardiovascular and urinary tract problems were common in older men, accounting for about 34 percent of patients. The second most common mix of post-COVID symptoms, affecting nearly 33 percent of those studied with Long COVID, included respiratory complications, chest pain, anxiety, headaches and myriad sleep disturbances. Victims of this second subtype had lower hospitalization rates than the first but were more likely to test positive for COVID-19 in future flare-ups of the pandemic recorded between November 2020 and November 2021.

In the third subtype, 23 percent of patients had musculoskeletal symptoms. The fourth subtype of people studied was the 10 percent who showed digestive and respiratory symptoms. “This [subtypes] may inform effective hypothesis generation for long COVID biomechanistic studies as well as treatment development strategies for long COVID,” said study author Dr. Fei Wang of Cornell University.

Join the fight to end the COVID-19 pandemic

Someone from the Socialist Equality Party or the WSWS in your region will be in touch with you promptly.