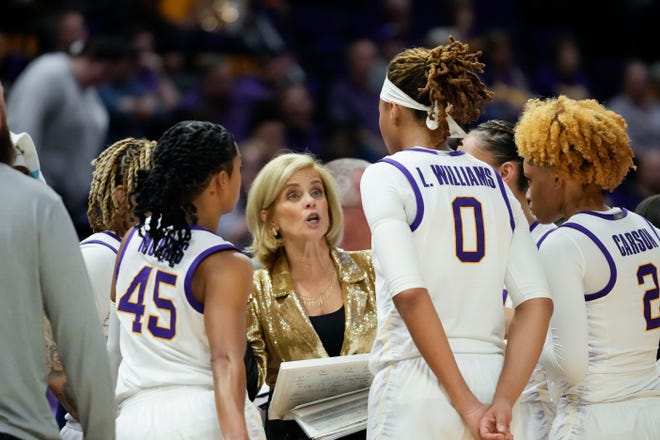 What will the energy of LSU women’s basketball No. 3 be when she’s back on the streets and taking on a talented Alabama team in Tuscaloosa?

In their final game, Kim Mulkey and her Tigers (19-0, 7-0) found themselves in their first losing streak of the season at home to Arkansas in the fourth quarter.

LSU expended more energy and emotion than it needed to in 19 games this season and was close to seeing its program record 18 wins on its own floor.

How will the Tigers fight back? Can they regroup fast enough to take on Alabama and star guard Brittany Davis in just a few days Monday night (6 p.m. SEC Network)?

With another double-double, her 20th straight double-double, sophomore LSU forward Angel Reese will break the back-to-back double-doubles program mark of legend Sylvia Fowles. Reese set the record against Arkansas, scoring 21 of their 30 points in the second half.

Davis is the fourth-best scoring player in the Southeastern Conference at 17.6 points per game. The senior guard has one of the best all-around skills of any guard in the conference and has the ability to take games offensively, as she did in a recent big win at Ole Miss.

Tigers guards Morris, Johnson and Jasmine Carson must have Davis checked at all times. If they limit Davis, winning will be much easier.

The Razorbacks are known for their 3-point ability and several defensive mistakes down the stretch from the Tigers caused them to lose the lead late on. Arkansas made 10 3’s Thursday.

Alabama can shoot from the outside just as well as Arkansas. The Tide Paces earned a 3-point percentage at the SEC with 39%, led by the league’s top two shooters in Hannah Barber and Aaliyah Nye with 49% and 46%, respectively.

LSU 68 Alabama 60: Reese gets her 20th straight double-double as Alabama starts hot, but LSU’s defense gets enough stops on the track to wrap up another SEC road win.

Cory Diaz covers the LSU Tigers and Louisiana Ragin’ Cajuns for The Daily Advertiser as part of the USA TODAY Network. Follow his coverage of Tigers and Cajuns on Twitter: @ByCoryDiaz. Have questions about LSU/UL Athletics? Send them to Cory Diaz at [email protected].