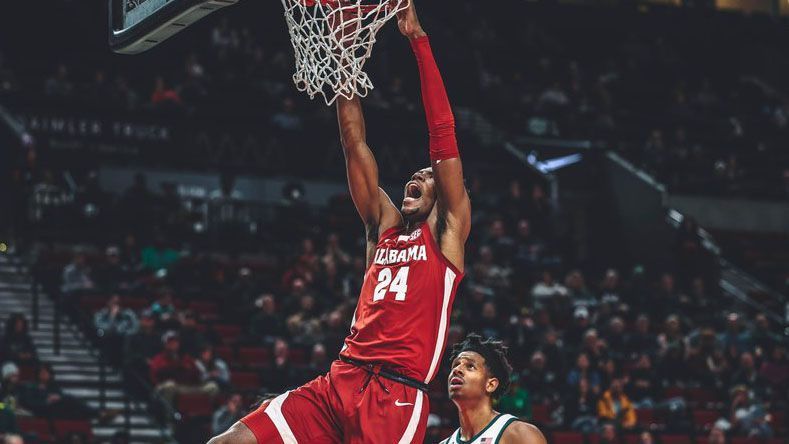 PORTLAND, Ore. – The No. 18-18 Alabama men’s basketball team opened the Phil Knight Invitational with an 81-70 win over No. 12-15 Michigan State and advanced to the winning group on Friday to take on No. 20 UConn . Brandon Miller led the Crimson Tide, scoring a game-high 24 points, plus nine rebounds and two blocks.

The first half was a back-and-forth with nine lead changes and four draws. Miller sparked Alabama’s offense by scoring 17 points that came with five rebounds in the opening stanza. The Tide got hot late in the half, shooting 48.5 percent in the first half (16 of 33) and topping it off with a three-pointer from Miller on the buzzer to take a 42-37 lead at the break.

Alabama’s defense was exceptional at protecting the three-point line, as the Spartans failed to score a three-pointer until the 13:49 mark in the second half. Jahvon Quinerly and Alabama’s bench got into the clutch in the second half and had 16 of Alabama’s 39 points in the last 20 minutes, led by Quinerly’s eight points, three rebounds and two assists.

“It’s a great win for us. They (Michigan State) could easily have gone into this game 4-0, so I’m proud of how our boys reacted. I thought we finished the first half great and had a good opening four minutes apart from the two points and then I thought we finished the first half well. I think we opened the game well and obviously got into their lack of depth without them having a couple of guys in the rotation that we could take credit to them, they hit some hard threes and got to the free throw line a couple of times and were able to stay in the game and make it a pretty close game it would be nice to close a little better. It’s a gain in quality, we’re on the right track.”