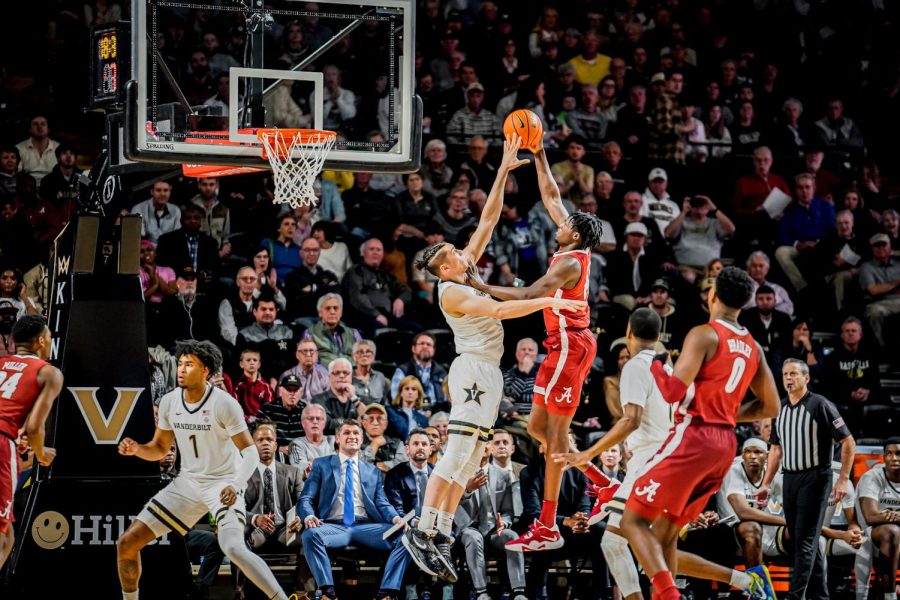 Quentin Millora-Brown takes on the Alabama Crimson Tide for one block on Tuesday, January 17 at Memorial Gymnasium (Miguel Beristain/Hustler Multimedia).

Vanderbilt started behind the eight-ball on Tuesday night, and that was before the ball was even tipped: news About an hour before game time, it was announced that star center Liam Robbins would miss the game – and be sidelined 4-6 weeks with a sprained ankle.

Without Robbins, Vanderbilt (9-9, 2-3) only led once and never really threatened, losing 78-66. 4Alabama (16-2, 6-0). The Commodores failed to capitalize on it momentum built from theirs to win over No. 25 Arkansas on Saturday as the Crimson Tide stayed perfect in league play and avenged last year’s SEC tournament loss.

“At the end of the day, they were better than us tonight,” said Jerry Stackhouse after the loss. “Brandon Miller had a great performance for her. It was a bit difficult tonight without Liam [Robbins]…not having that option tonight made it a tough sled for us tonight.”

The Commodores opened the contest in a similarly dismal manner, starting the game 1-10 from the field as Alabama built a 13-3 lead after just over five minutes. Vanderbilt came back in the next four minutes to cut the deficit 15-13 as there was a running battle on both sides in the first half.

The Crimson Tide responded with back-to-back buckets from star newcomer Brandon Miller, who finished with 12 points in the opening frame for a 19-13 advantage. Vanderbilt’s newcomer duo of Lee Dort and Malik Dia was undeterred, igniting an 8-2 run for Commodore to take a 22-21 lead. The one point lead represented Vanderbilt’s lead of the night over the Crimson Tide.

“Lee, it’s a great experience for him. I thought Malik would come out and give us some good minutes on offense,” Stackhouse said. “It’s a great opportunity for her to grow up fast over the next few weeks.”

Things dried up quickly on the offensive end as Vanderbilt had just four more points in the last eight minutes of the half. The Tide quickly gained the upper hand after the Commodores’ offensive incompetence, pushing to a 32-22 before a layup from Dort stopped the bleeding. The two teams traded a pair of baskets as Alabama put a 36-26 into the dressing room. Jordan Wright led by 6 points for the Commodores, with Dort and Dia scoring 5 points each.

Despite a 20-minute breather at halftime, Vanderbilt’s shooting fared far worse in the second half than in the first: The Commodores only scored four points overall in the first seven minutes from the dressing room.

As Vanderbilt sagged through the opening portion of the half, the Crimson Tide built a 53-30 lead behind some more Brandon Miller fireworks. The 53-30 deficit marked the first time all season that an opponent gained a 20-point lead over the Commodores as Alabama capitalized on Vanderbilt’s terrible early shooting.

Finally, Wright tapped in a 3-point shot to get Vanderbilt off the edge. This set off a mini 9-0 run for the Commodores to put the game back to a respectable 53-39 lead. The teams traded baskets for the next four minutes, which turned into a two-way defensive battle in the second half.

Miller continued to trouble Vanderbilt at all three levels, scoring seven straight points for the Crimson Tide as they maintained a double-digit lead. Tyrin Lawrence countered with his best impression of Scotty Pippen Jr., hitting a two-point jumper and getting to the line twice to score six straight points and take Vanderbilt to 13 points, 62-49.

The Commodores recovered late to get into the single digits and went on an 11-6 run to go 68-60 with a 1-1 lead in the contest. After a defensive stop, Wright quickly ran over the rim to take the deficit to 68-62 by just over 40 seconds. The Commodores fouled Miller on the inbounds, who calmly sunk two free throws to push Alabama’s 70-62 lead back to eight points. An offensive foul on Myles Mare sent the Crimson Tide back to the free throw line on subsequent possession, where Noah Gurley knocked down two more free throws.

Vanderbilt will be back in action on Saturday afternoon when they take on the Georgia Bulldogs on Saturday, January 21 at 12:00pm CST in Athens, Georgia.