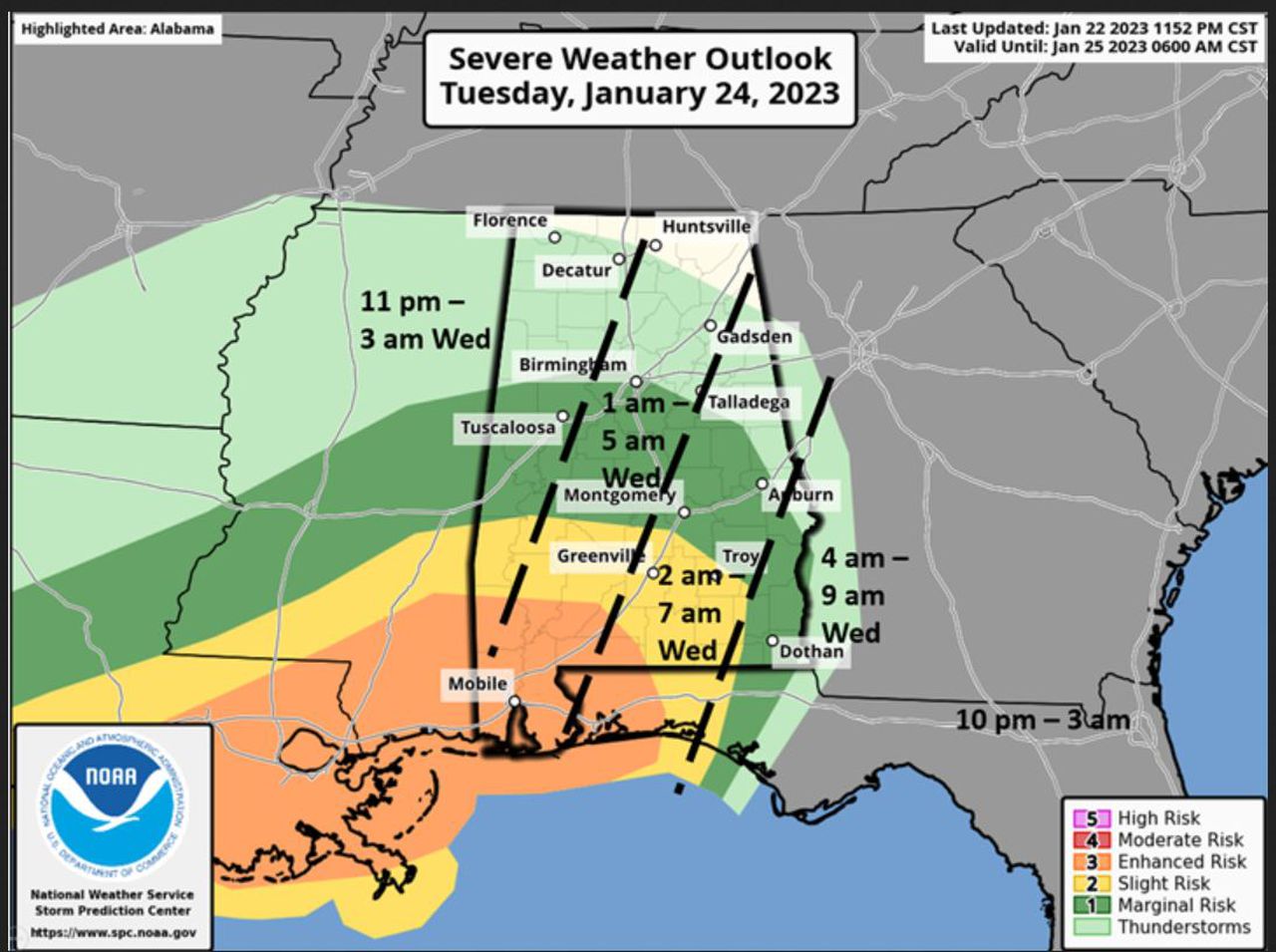 A variety of severe weather scenarios are possible late Tuesday evening through Wednesday morning, with the possibility of strong storms in parts of Alabama, the Alabama Emergency Management Agency said.

According to Jim Stefkovich, meteorologist at Alabama EMA, the strength of storms is determined by both quantity and atmospheric instability.

“This is a very powerful storm system that contains strong upper-level winds and wind shear to encourage rotating storms,” ​​he said.

The most likely scenario, Stefkovich said, is that the peak instability will occur south of a Highway 80-I-85 line or south of a Livingston-Montgomery-Auburn line. Supercell development is expected to develop in this region both as single cells before and within a series of storms. Straight-line damaging winds, hail and tornadoes are all possible, including EF2 or greater intensity, particularly in the high-risk area of ​​the extreme southwest of the state.

Because the storm system is so strong, Stefkovich said, although there will be little instability between Highway 80 – I-85 and I-20, there will be widespread straight-line wind gusts of 40 to 50 miles per hour, some of which may reach 60 miles per hour reach hour. However, the tornado risk in the area will be low.

Strong winds without a thunderstorm will develop statewide late Tuesday afternoon or evening before the storms and will persist throughout the night. Sustained winds of 15-25 mph gusting 30-40 mph will occur.

Although less likely, the instability could move further north than Highway 80-I-85. Should this occur, a more widespread storm would be possible and would extend further north. On the other hand, if instability cannot spread as far inland, the severe weather threat would be mostly confined to areas near the Alabama-Florida state line.

timing of the storms

The low-risk area, places like Greenville, will storm Wednesday from 2 a.m. to 7 a.m. The biggest problem area – Enhanced Risk – includes Mobile and Baldwin counties. These storms could start around 11 p.m. on Tuesday and last until after 7 a.m. on Wednesday.