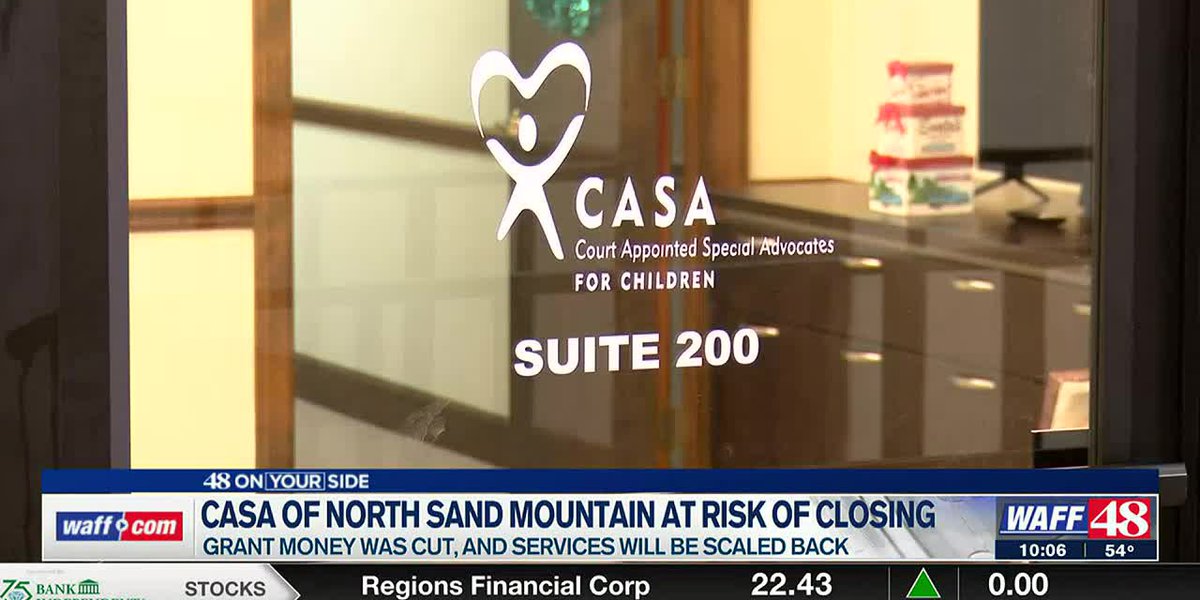 HUNTSVILLE, Ala. (WAFF) — Hundreds of abused and neglected children in Jackson and DeKalb counties are at risk of losing an important lifeline after funding was cut, forcing a local child advocacy program to shut down shop.

North Sand Mountain CASA leaders and the DeKalb County Sheriff fear the children they serve will have many different futures without the program.

“If our kids don’t get that future, that education, the criminal element is going to increase,” said Nick Welden, DeKalb County Sheriff. And Welden isn’t the only one worried about CASA closing its doors.

The Court Appointed Special Advocates for Children (CASA) group aims to provide a volunteer for every abused and neglected child. With grants cut, they’re running out of time, says executive director Kelly Klein.

“I take it day to day because I just don’t know right now,” Klein said. “I don’t think it could possibly last a few months.”

The grant cuts mean they have had to close their center in downtown Scottsboro and move to a one-room space at a nearby church. Klein explains what it would mean if the center closed for good.

“If we lost it, I think our judges would be really blind because they wouldn’t know what decisions to make in the child’s best interests,” she said.

CASA employees are appointed by a judge to be the eyes and ears of the court to find out what’s going on, unlike some child advocates who, according to Klein, don’t always know or even go to the children’s homes. Klein explains what’s at stake if the program goes away.

“If there is no one to look after the children, who will? It scares the shit out of me to think of who’s going to know what’s really going on,” she said.

Sheriff Welden echoed Klein’s opinion, adding that he was concerned that the children would end up in a life of crime if they didn’t have people to take care of them.

“If we get rid of that, we’re just opening the floodgates to a terrible future for these kids,” Sheriff Welden said. “As a society, we need to stand together and work together to make sure that doesn’t happen.”

The Executive Director explains that North Sand Mountain’s CASA was not among the beneficiaries of Governor Ivey’s recent multi-million dollar push for better support for victims of child abuse.

Instead, she explains how North Sand Mountain’s CASA received funds through ADECA/VOCA grants, which are the funds that were cut.

Program leaders now say they are hoping for donations from the community. If you would like to donate, visit their website.