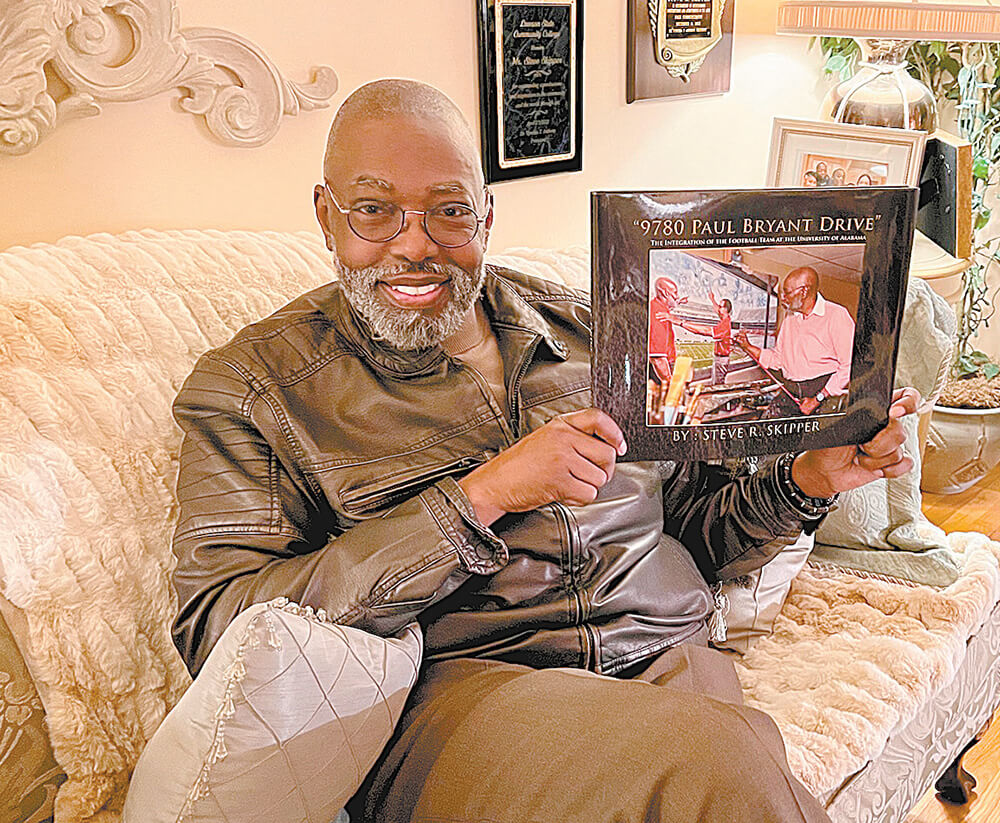 Artist and author Steve Skipper had no intention of writing a book about the integration of the University of Alabama football team.

But while researching a memorial painting honoring John Mitchell and Wilbur Jackson, the first two black players of the Crimson Tide, it became more than just a work of art. A book entitled 9780 Paul Bryant Drive: The Integration of the Football Team at the University of Alabama became available.

Describing the recently published book, Skipper said, “It is a compelling and epic story and account from players, coaches and administrators who witnessed and were impacted by the culture-changing integration of the Alabama football team.”

“It started when I painted a memorial for the Bryant Museum to celebrate the integration of football in Alabama,” said Skipper, who grew up in the Rosedale community and played football at Homewood High School. “You hear a lot of talk about it and mostly it’s just myths, like what happened after the game against USC (1970).”

USC started an all-black backfield with Sam “Bam” Cunningham, who rushed for 135 yards and two touchdowns, leading the Trojans to a 42-21 season-opening win over the Tide at Legion Field.

Cunningham and the Trojans were falsely credited with convincing Alabama coach Paul “Bear” Bryant to integrate his team. But Jackson, a halfback, had already signed with Tide. Since freshmen were not eligible to play for varsity under NCAA rules at the time, Jackson watched the game from the undergraduate section.

The next season, Jackson and Mitchell, a defensive end and junior college transfer, became the first black players in Alabama football history and helped The Tide open the 1971 season with a 17-10 win over USC at the Los Angeles Memorial Coliseum .

“Some of the things that were said about integrating the Alabama football team weren’t true,” Skipper said. “I decided to tell the story and tell it accurately, and it turned into a book.”

“Reg. Wallace deserves credit for changing his mind and life,” Skipper said. “I’m focused on the change because he’s repented and admitted he was wrong. I have experienced the grace of God in my life, so I cannot deny that God is doing the same to him.”

“I thank God for these two men as every player who came to the University of Alabama with and after them, black and white, needs to look back and say thank you because the great legacy of Alabama football was enriched by them and their riches Footprints are still and always will be all over the Capstone,” Skipper said.

The coffee-table style book with a colored cover is published by Skipper’s Anointed Homes Art LLC. It is available online at steveskipperstudio.com in a standard edition for $69 and a limited edition for $170, individually autographed by Skipper, Mitchell and Jackson. Prices include shipping within the continental United States.

Skipper’s memorial painting, titled 9780 Paul Bryant Drive, was unveiled last year at the Bryant Museum in Tuscaloosa and the Alabama Sports Hall of Fame in Birmingham.