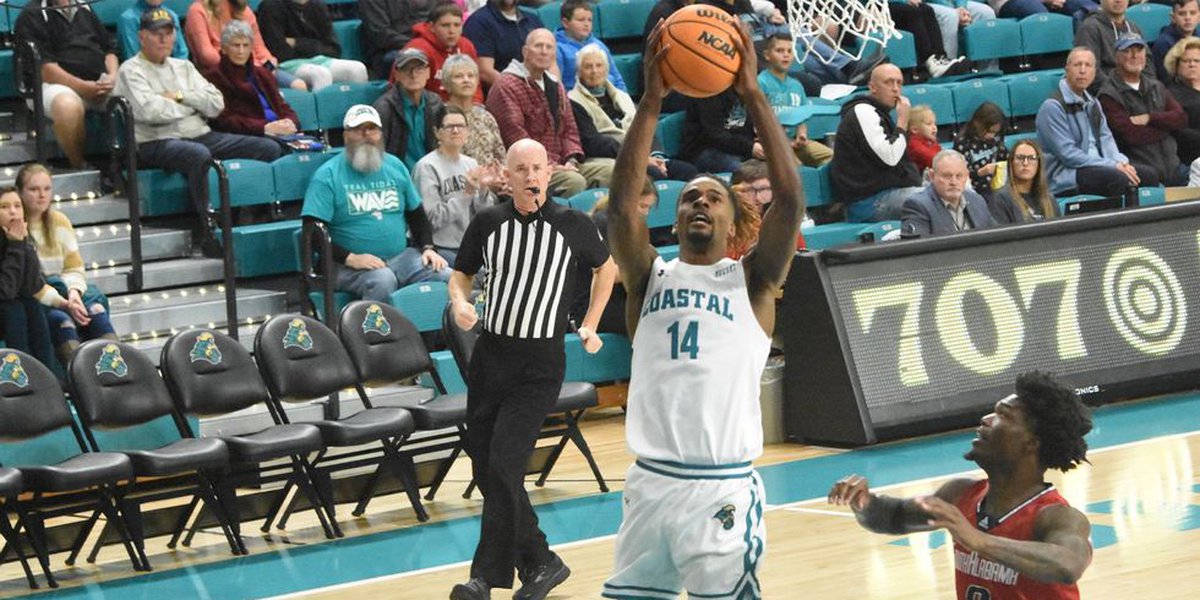 CONWAY, SC — Josh Uduje netted a career-high 33 points, including four free throws in the final 22 seconds of overtime, to lead Coastal Carolina to a hard-fought 85-81 overtime win in a Sun Belt Conference game on Saturday South Alabama Afternoon at the HTC Center.

Uduje, who had 26 of his 33 points in the second half and overtime, was joined by Essam Mostafa, who had 19 points, and Antonio Daye, who had 10. Mostafa also snagged 13 rebounds to collect his 13th double-double of the season. Daye had a game-high 11 assists for his second double-double in as many games. Wilfried Likayi added seven points and 13 rebounds while Henry Abraham hit three threes for nine points.

In all the excitement of the overtime win, Mostafa got lost in the game, coming into the game needing just 18 points to reach 1,000 career points. After 15 points in the first half, the second half was much more difficult for the redshirt junior, who eventually made it to the 1,000 on a free throw at 4:18 of the game. to score point.

With Coastal trailing 74-72 by just over three minutes in overtime, Daye hit from a layup and was fouled in the game. His free throw put the Chants at 75-74 and they would hold the rest of the way to lift their record to 10-9 overall and 4-4 in the league. Daye had eight of his team’s 17 points in overtime while Uduje had seven.

Jones, who hit six threes, netted a career-high 25 points in a losing game for the Jaguars that fell to 8-12 overall and 2-6 in the conference.

“Josh Uduje put us on our backs. What a great game he played,” said Coastal head coach Cliff Ellis. “His confidence is increasing and I’m happy for him. And Essam Mostafa, he just brings it every day. They’ve got to start calling us the heart children,” Ellis continued, referring to his team’s back-to-back overtime wins. “The fans are enjoying it, but it’s going to drive me insane. That’s just how this conference is.”

Coastal made it look easy early on, hitting 8 of 11 shots to start the contest and take a 17-4 lead. Mostafa had three inside buckets in the run, which was crowned by a slam dunk by DJ Basey. And Mostafa was just getting started. He hit his first seven shots, all from close range, and had 15 points at the break. His final layup started with an 11-3 run that included two threes from Abraham and gave the Chants their biggest lead at 41-25. South Alabama stayed within reach by hitting six threes, with the final three going 41-28 at halftime.

Coastal, now 7-3 at home, hit 49 percent (33 of 68) shots from the field and made 12 of 15 free throws, including all six in overtime. The Chants also gave out 15 assists for the game and had a season-low of just seven turnovers. Coastal capitalized on the efforts of Likayi and Mostafa to hold a 43-32 rebound advantage.

South Alabama made 16 of his 31 baskets from beyond the three-point line, with Jones hitting 6 of 13 from long range.

Coastal will play its third home game in five days on Monday, January 23 when the Chanticleers host Chicago State at 7 p.m. ET. The chants will then head to James Madison on Thursday, January 26 for a 7:00pm ET start before heading to HTC next Saturday, January 28 for a 4:00pm ET tip against Old Dominion return center.