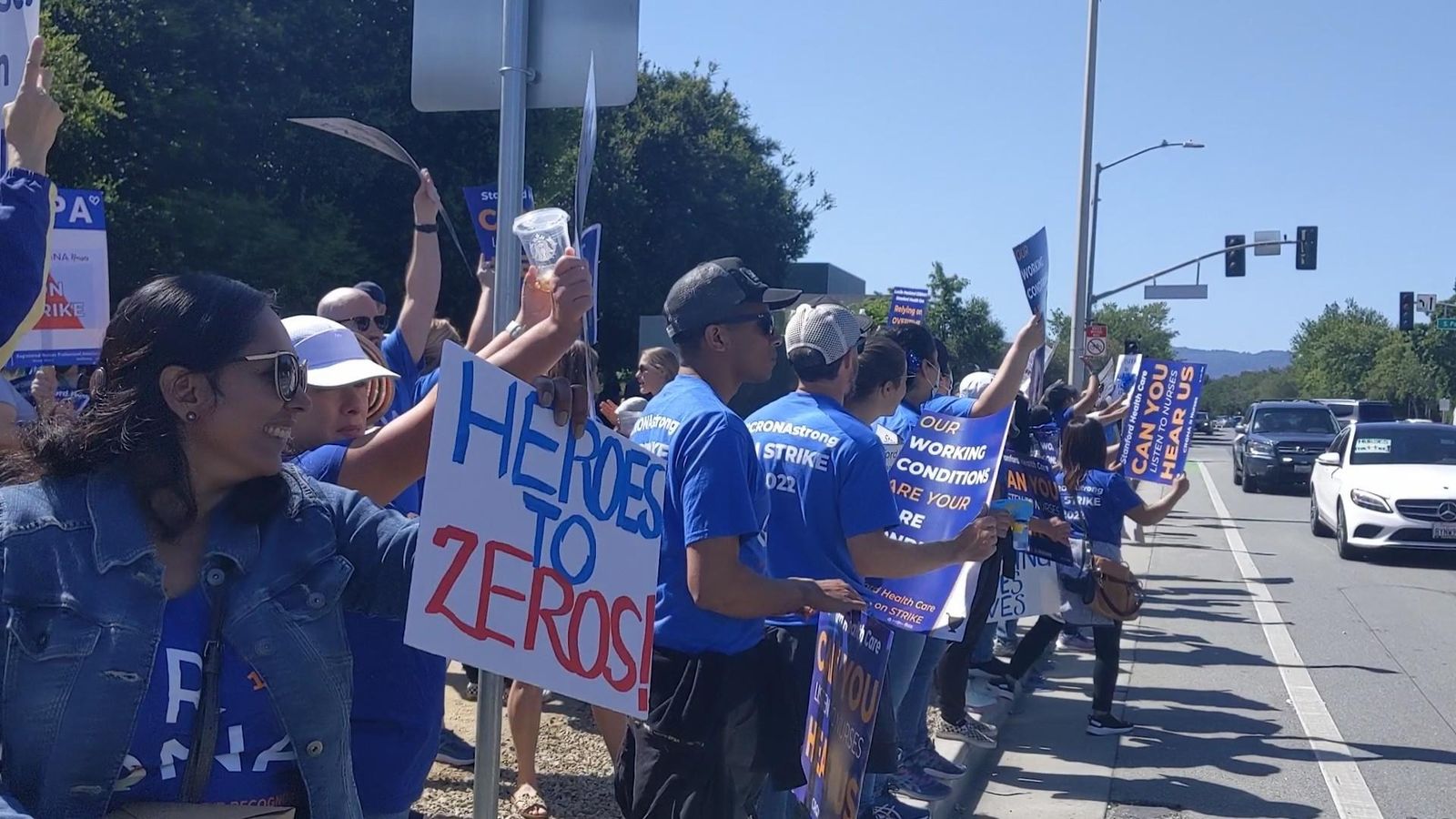 The following letter to nurses in New York was written by a nurse from Stanford, California who took part in last year’s strike. Nurses in New York are voting on Tuesday on a sell-out deal agreed by the union, which called off its strike last week.

As a California nurse who went on strike last year, I want to both send my support and alert my colleagues in New York to the position of strength you are in, but also the danger you are at are exposed to at this point in your struggle. Think of this as a nurse-to-nurse report at the end of the shift. I am giving you the information we have learned in our struggle so that you can not make the same mistakes and advance our struggle together as healthcare workers.

Our strike by 5,000 nurses last year took place at Stanford Health Care and Lucile Packard Children’s Hospital in Stanford. Despite our strength, after five days of our struggle, we were betrayed by Stanford’s union, the Committee for the Recognition of Nursing Achievement (CRONA), when they abruptly ended the strike late Friday night and handed us a shameful contract that so far has done nothing but worsen our working conditions.

The ordinary nurses had to fight to even get a copy of the full preliminary agreement. It wasn’t until we started organizing a simple committee to take matters into our own hands that the full TA was released.

Our primary concern was staffing safety and our contract contained nothing but vague announcements of a new staff committee and a plan to begin adjusting staff based on acrimony.

The clearest indication that the contract was a treason is in our current terms. A new and worse staffing grid was quietly released in early December, requiring fewer nurses on the floor. Additionally, as a result of the surge in the “triple disease” our units have vacated floor beds and the ER is under tremendous pressure to get patients onto units as quickly as possible, leaving us little to no time to prepare. Every day, nurses call and text each other to convince them to come early or work extra shifts when we’re short.

Nurses everywhere know that improved staffing is key to regaining our profession. We cannot be compassionate and thoughtful advocates for our patients if we continue to be pushed to admit more patients, skip breaks, and take on increasingly strenuous workloads. The entire healthcare system is at a breaking point.

There is tremendous determination among nurses and healthcare workers to fight for better conditions, particularly in terms of staffing. The unions know we are angry. They call us to strike, but then they isolate us, ignore our democratic rights, and work closely with management to draft a “historic contract” that falls short of our demands.

The unions, whether CRONA or NYSNA, have no solution to our problems because they work within the for-profit medical system. Neither Stanford, Montefiore, Mt. Sinai nor any other hospital in the US has any intention of meeting our key requirement for safe staffing as it would hurt their bottom line. The ongoing pressure on nurses to do more with less is empowering healthcare, insurance, pharmaceutical and medical technology companies alike.

We nurses need to take matters into our own hands and build a strong movement of health workers and nurses to get to the root of the problem.

The personnel issue cannot be separated from the uncontrolled spread of COVID-19 and the catastrophic state of the health system in the USA. We have learned this over the past three years, when the corporate elite that run the hospitals and the politicians who once claimed we are “heroes of healthcare” are utterly indifferent to the lives and health of healthcare workers and patients .

At Stanford, the hospital reached an all-time record capacity in mid-December as the “triple pandemic” surge overwhelmed the area. A week later, the hospital announced that only symptomatic patients would be tested for COVID-19, replacing the previous policy of universal testing on admission and before procedures. PCR testing for employees has also been discontinued. Undoubtedly, as a result of these guidelines, more workers and more patients will be exposed to and contract COVID-19.

Over the past year, the hospital also stopped housing COVID-19 patients in specific units, instead dispersing them throughout the hospital, even on oncology floors where the other patients are extremely immunocompromised. Given the poor staffing situation, we do not have the resources to appropriately divide duties, so one nurse may be assigned a COVID-positive patient and a neutropenic patient that we know are unsafe.

As conditions continue to deteriorate, we turn to each other in the nurses’ station and ask sarcastically, “Where’s CRONA now?” When snap vote was first called, we began to see who the union really was. Many of us got together to discuss what had happened. We formed a base committee. We demanded NO, made our own demands and called for a nationwide nurse strike.

Our fight at Stanford isn’t over, and neither is yours. The struggle of healthcare workers has only just begun. It is now more important than ever to continue the struggle and not accept the dictates of the union bureaucracy.

Choose no! Neither the New York State Nurses Association (NYSNA) nor National Nurses United (NNU) are fighting for you. They isolated your struggle and separated you from your peers by signing separate sellout contracts covering the other hospitals. The highlights of the tentative agreement – which they continue to withhold from you in full – show sub-inflationary rate hikes and do nothing to address staffing.

Form a grassroots committee! As nurses, we know how to communicate, how to plan, how to prioritize. You must do just that, forming a simple committee, democratically elected by nurses, to take your fight into your own hands.

Expand your fight! Talk to each other, across hospital systems, across states, like I’m doing now. We know the healthcare system is not safe. We know that our demands will not be met if we settle for what hospitals are willing to offer instead of what we need. This type of struggle requires a plan and the mobilization of broad sections of the working class in NYC and beyond. They have massive support from healthcare workers and workers from every industry around the world and all over NYC.

Nurses and healthcare workers must fight this corporate-driven onslaught for themselves in order to profit from medicine and join a broader political fight against mishandling the COVID-19 pandemic.