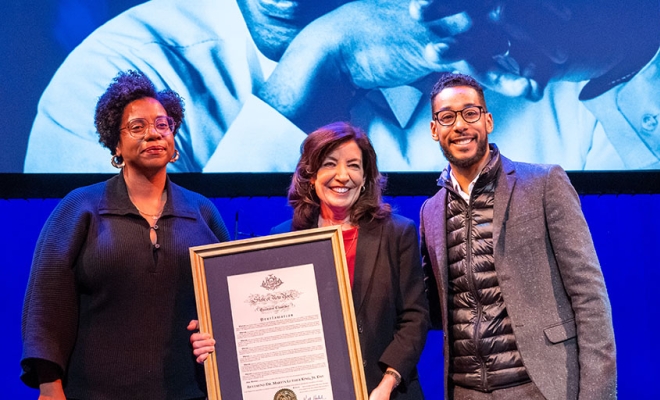 “In the midst of the recent increase in bigotry, division and hatred in this country, it is more important than ever that we heed the teachings of Dr. Remember Martin Luther King Jr. on justice, peace, equality and love.” said Governor Hochul. “Here in New York, we must recommit to the same principles and work toward a more united New York, where all residents can live and prosper in peace.”

New York State’s annual commemoration of the life and legacy of Dr. Martin Luther King, Jr. will be broadcast as a national broadcast entitled New York State Celebrates Dr. Martin Luther King, Jr.: Paths to Change” presented Friday, January 13 at the Empire State Plaza Convention Center and streamed at empirestateplaza.ny.gov/nyking. The hour-long tribute to Dr. King profiles people and organizations from across New York State who embody the principles of one of America’s greatest leaders for social justice, liberty and equality. Program times vary by region and viewers are encouraged to check their local TV listings.

Please visit empirestateplaza.ny.gov/nyking and follow @NYSMLK on Facebook and Twitter for PBS member station program updates and additional information on New York’s celebration of the life and legacy of Dr. King.