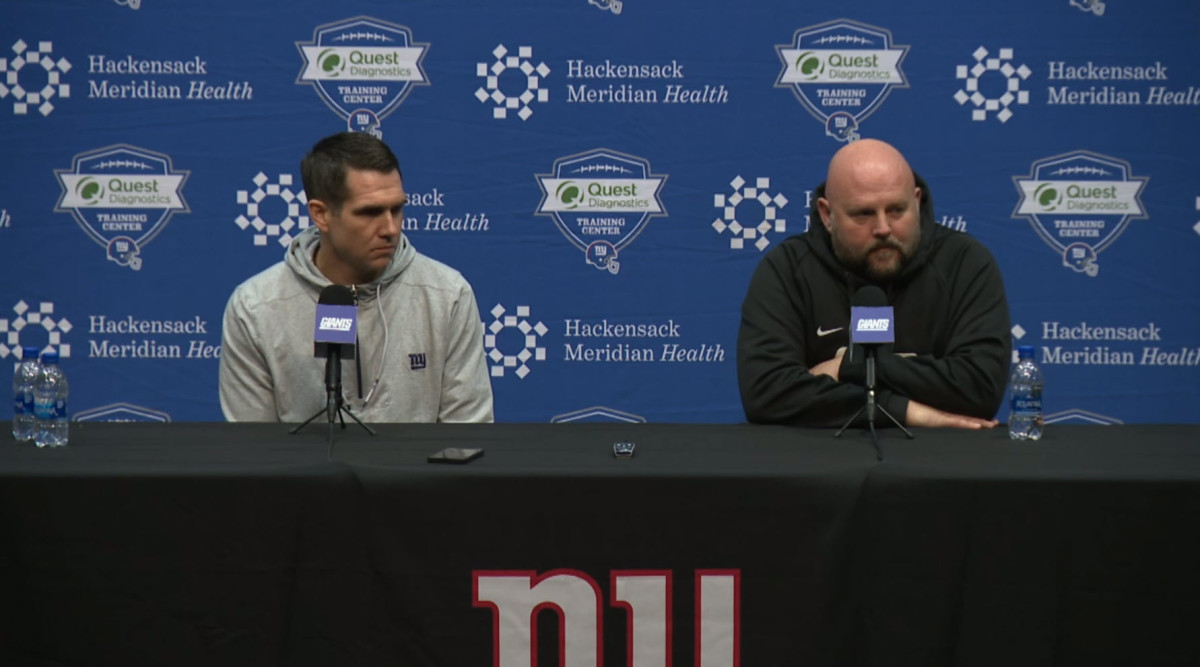 On Sunday, New York Giants quarterback Daniel Jones and running back Saquon Barkley, the team’s two biggest unrestricted free agents, expressed interest in returning to the team for 2023 and beyond.

That must have been music to general manager Joe Schoen’s ears, because during his joint year-end press conference with head coach Brian Daboll, Schoen confirmed the team’s interest in retaining the two most productive members of the team’s 2022 offense.

“We want Daniel to be here,” Schoen said, adding, “There’s a business side, but we feel Daniel has played well this season. He did everything we asked him to do.

“We still have to meet with our staff at the end of the week and we’ll be working out a plan for the off-season, but we’d love to have Daniel Jones back.”

“He did everything we asked him to do as the offensive staff and he did a really good job operating and running our offense,” Daboll said. “I think he’s made progress in many different areas. Sure we can all make progress, but he’s been a good leader for us. He played a good quarterback position for us and I’m glad we have him.”

Schoen did not specify whether the team was interested in bringing Jones back on a short-term or longer-term contract, noting that the front office and coaching staff planned to start their staff meetings later in the week.

“We haven’t crossed that bridge yet, but we have tools at our disposal. Again, we will go through several scenarios,” he said. “We’re going to sit down as collaborators, go through the different options and have those discussions.”

Schoen, who stressed that he doesn’t believe in the philosophy that a team is ever a player away, was asked if he thought the Giants could win a Super Bowl with Jones at quarterback.

“We’re delighted that Daniel will be here,” he said. “Hopefully we can achieve something with his representatives. That would be the goal, to build a team around him that he could lead us to winning the Super Bowl.”

When it came to Barkley, while Schoen also expressed a desire for the running back to remain a giant, he had a slightly different tone.

“For me this is a special team. We would like to have all the boys back,” he said. “But there is a business side and rules you have to work under in terms of salary cap.

“Saquon – he’s a good player and a great teammate. I’ve loved getting to know him this season; he’s a guy we’d like to have back.

“We haven’t had, you know, our end-of-season meetings yet. Everyone will step down, take the emotions out, evaluate the roster, and we’ll be working under a salary cap – how are you? will we split it up, how, how will we create the squad, what are the priority positions and how will we progress? But we’d like to have Saquon back if it works out.

The Giants could always give Barkley the franchise tag, which would cost them just over $10 million, and keep him under contract for another year if the two sides can’t agree on a new deal. But that move would likely depend on whether they could lock Jones up before the March 7 franchise/transition day deadline.

For the most part, running backs who get big second contracts don’t usually come through, creating dead money for the team to carry, which raises another question Schoen and the Giants need to answer.

In the end it comes down to the money and whether a deal can work for both sides.

“Saquon has done everything we asked him to do and he’s a good footballer,” Schoen repeated. “The position value – we’re going to look at how we want to build this team and allocate our resources. And that is what it is about.”