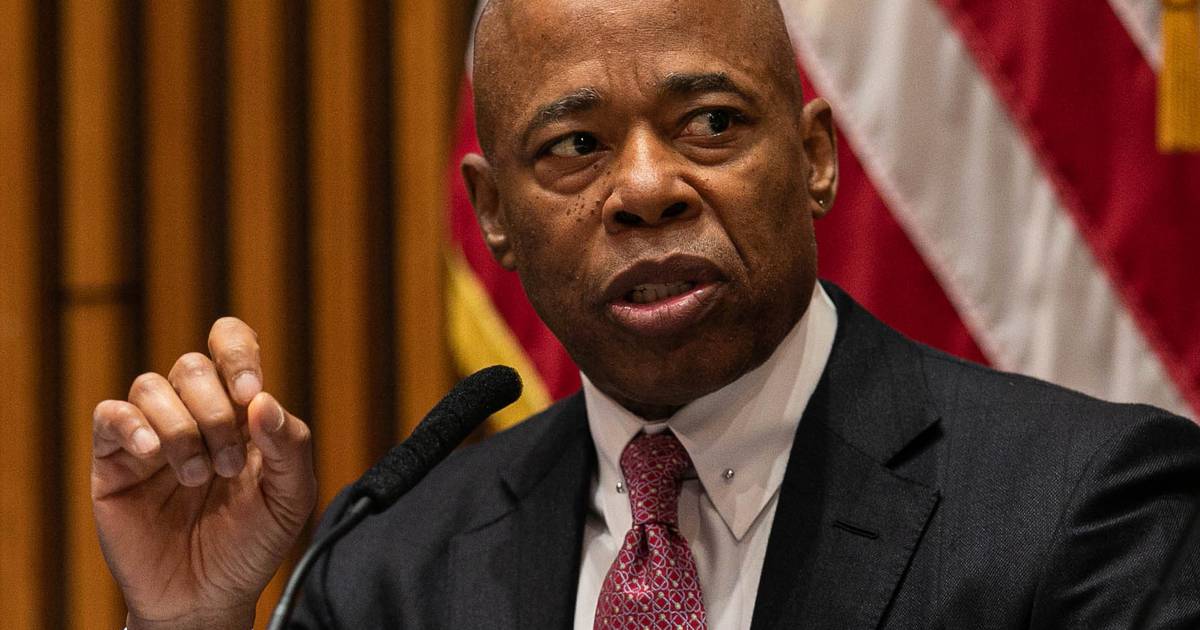 Mayor Adams is taking media coverage into his own hands.

Adams, who has become increasingly moody lately at being reported about him by City Hall press, launched a newsletter on Monday which he claimed will counter “distorted” journalism about his government.

In an argument with the reporters who cover him every day, Adams said he decided to start the new Hear From Eric initiative because “all the great things we do are distorted or not reported at all.” .

“You can report a distorted version of what I’m saying. I want to speak directly to the people of this city,” Adams said when asked by the Daily News why he was starting the media service.

[ Mayor Adams blasts de Blasio administration officials for criticizing him, blames them for ‘mess we inherited’ ]

Adams, speaking during an independent news conference in the Bronx, declined to say how much the newsletter is expected to cost taxpayers. However, a city hall spokesman said later in the day that the administration expects to allocate more than $75,000 a year to the initiative.

When asked how often the newsletter would appear, the spokesperson replied, “As often as we think it can be an effective tool.”

In a statement ahead of his press conference, Adams’ office said New Yorkers could sign up through a town hall web portal to receive the newsletter in their email inboxes.

“Thank you for signing up to hear directly from me about the work we do for Get Stuff Done for New Yorkers. You’ll receive breaking news and updates on city initiatives – all tailored to your personal interests,” reads an automated email from the mayor that readers receive upon registration.

When asked during the Bronx event if there’s anything in particular he struggles with in terms of reporting on his government, Adams said with a laugh, “Pick an issue.”

He grew nostalgic for the days when he claimed there were “columnists and reporters.”

“Columnists would voice their opinions, reporters would just cover the news. Well, I don’t know who is the columnist and who is the reporter,” he said. “If I’m speaking at a press conference and then I read the story, I’m like, ‘Were we at the same press conference?'”

He also claimed he would be “surprised” if local outlets reported on the main theme of his Monday event — a $75 million soft loan fund for small businesses, funded in part by Goldman Sachs.

In light of Monday’s letter, some critics of Adams drew parallels between the mayor and former President Donald Trump, who is notorious for calling the media “enemy of the people” and accusing reporters of “spreading fake news.”

Ken Frydman, a political strategist who once served as an advisor to Mayor Rudy Giuliani, questioned the public utility of Adams’ foray into the media.

“’Hear From Eric’ is not a media service. It’s political propaganda aimed at getting Eric Adams re-elected,” Frydman said.

The mayor did not name any specific sales outlets in his anti-press statements.

But since taking office over a year ago, he has regularly complained about coverage from The News and other outlets reporting on him at City Hall. His complaints have become more frequent in recent weeks.

In a Jan. 9 appearance on AM-970 radio, Adams claimed “the most disappointing aspect” of being mayor is that “a lot of people who were supposed to be cheering the city on have done the exact opposite,” including journalists who “don’t feel like it “just have to tell the truth correctly.”

And in a speech to civic leaders in Manhattan on Dec. 14 – shortly after returning from a trip to Qatar – he accused the press corps of focusing on the “worst part of our day” and said he didn’t see similar media coverage when he is abroad.