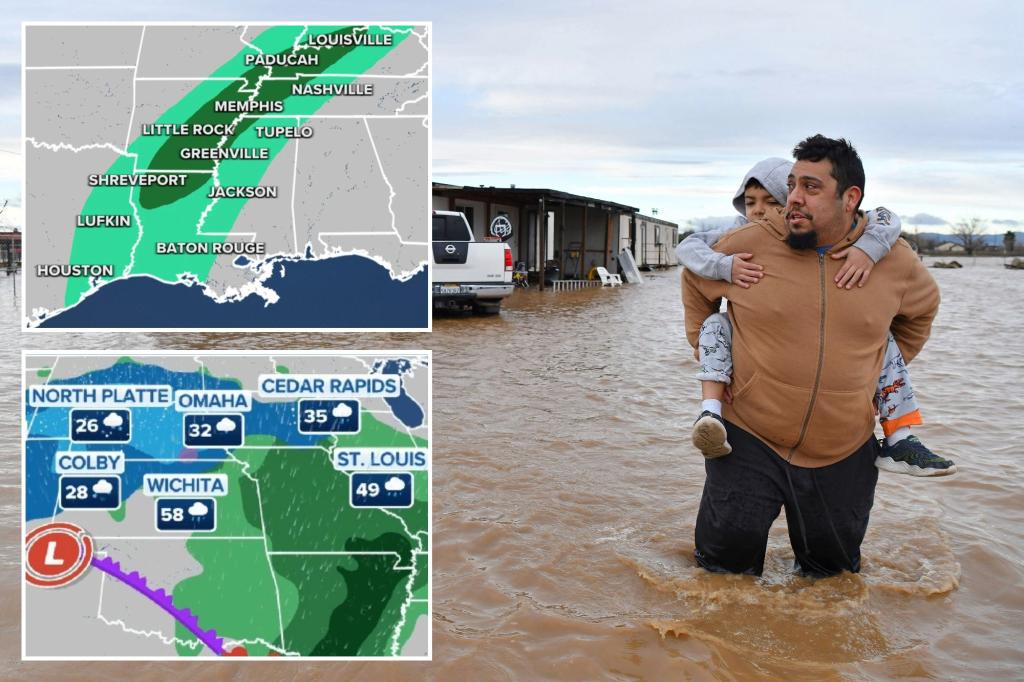 The FOX Forecast Center is tracking two separate storms that will pound the central and eastern U.S. this week, with severe weather, flooding, snow and ice expected to impact millions of Americans.

While the first storm is likely to be more of a disruptive event, the second storm is expected to be much stronger, bringing the potential for a severe weather outbreak in parts of the South on Wednesday while heavy snow blasts parts of the Plains and Midwest.

Storm #1: Rain and snow sweep across parts of the Midwest and East

The first storm began Monday morning as rain developed in the Midwest. The rain will gradually drift north and east throughout the day.

On the back of this first storm, snow developed over the Dakotas and northern Minnesota. Generally, only 1 to 3 inches of snowfall is expected, so expect very little impact on travel in the region.

The remnants of this system will migrate through the eastern US on Tuesday, with showers expected for much of the east. However, the precipitation is likely to begin as a frigid wintry mix of freezing rain, sleet and snow in higher ground in Pennsylvania and upstate New York before turning to rain later Tuesday.

The second storm of the week will develop over the central plains Wednesday morning and this one will carry both severe weather and wintry weather threats as it quickly speeds east and reaches the northeast by Thursday.

Severe thunderstorms will be mostly concentrated in parts of the south, which is still hit by an onslaught of two severe weather outbreaks this month. Once again, the FOX Forecast Center warned of another outbreak of severe weather on Wednesday, although the number of severe storms possible is still somewhat uncertain.

This severe weather threat is expected to begin early Wednesday afternoon and continue throughout the afternoon and evening as an unstable air mass develops from east Texas to south Arkansas, north and central Louisiana and west Mississippi. The combination of a cold front and a dry line — a boundary separating a moist air mass from a much drier, less humid air mass — will sweep east across these areas and provide the necessary trigger for severe thunderstorms to develop.

“As this storm system breaks out of the Rocky Mountains, we have this upper air support … these stronger upper level winds, and that’s going to force these thunderstorms along this boundary as this storm system gets going,” FOX Weather meteorologist Jane Minar explained. “We expect a lot of humidity, especially early in the day, and this is the key component in the forecast. When a lot of moisture is pulled up from the Gulf of Mexico, it contributes to environmental instability.”

Any storms developing closer to the cold front or dry line are more capable of damaging 60+ mph wind gusts, while storms developing ahead of the front in the so-called “warm sector” are likely supercell thunderstorms are from tornadoes, in addition to damaging winds and large hail.

As the cold front moves east through Thursday, there is some evidence severe storms could continue further east into the Ohio and Tennessee valleys and southeast, but confidence in Thursday’s severe weather threat remains low at this time.

In addition to the severe thunderstorms, the FOX Forecast Center is monitoring the potential for flash flooding on Wednesday. This flash flood threat will span a large area, from the Ohio Valley to the lower Mississippi Valley, and will include cities such as Cincinnati, Ohio, Louisville, Kentucky, Memphis, Tennessee, Little Rock, Arkansas, and Shreveport, Louisiana.

Those areas are expected to experience between 1 and 2 inches of rain on Wednesday, which combined with already saturated soils could create a significant risk of flash flooding.

On the wintry side of this storm, the FOX Forecast Center said a pretty impressive snow event is expected for parts of the central and northern plains and upper Midwest. This is because the strength of the storm system should allow for intense rates of snowfall, increasing confidence in the severity of the impact.

A winter storm warning has been issued by the National Weather Service from northeastern Colorado, including Denver, and far southeastern Wyoming east to parts of western Nebraska.

An area of ​​heavy snowfall is likely to develop in the High Plains of northeastern Colorado, western and central Nebraska, and northwestern Kansas Wednesday morning. Snow could fall at a rate of an inch or more per hour, causing intermittent whiteout conditions. Gusty winds of over 50 km/h also contribute to driving snow and further contribute to poor visibility.

Later Wednesday, the snow will expand eastward into southern South Dakota and the rest of Nebraska, then spread to the upper Midwest through Wednesday and Thursday.

A band of significant snowfall totals is expected along a line from northeastern Colorado to Nebraska, southern South Dakota and portions of northwestern Iowa. The FOX Forecast Center is confident that at least half a foot of snow will accumulate in some spots in this region.

“5 to 8 inches of snow in northeastern Colorado and along I-80 through Nebraska we could see 8 to 12 inches of snow, so the second storm is going to cause some problems,” said Britta Merwin, FOX Weather meteorologist.

It remains a little uncertain how much snow will fall in Minnesota, Wisconsin and northern Michigan as the storm system accelerates over the upper Midwest, which will limit the amount of time snow can fall in those areas.

Through Thursday, this storm system is expected to bring torrential rain across much of the Northeast and mid-Atlantic. However, with cold air blowing into parts of New England and upstate New York’s higher terrain, those areas could experience snow accumulation or a wintry mix changing to snow accumulation Thursday through Friday.

The FOX Forecast Center said the current guidance from computer forecast models suggests this could be a fairly impactful winter storm from the Adirondacks and Catskills in upstate New York to parts of central and northern New England, but confidence in the exact impact is uncertain still be small.

Regardless, the Interstate 95 corridor, which has been largely snow-free so far this winter, will likely see all of the rain from this storm system.

The storm will finally pull away from the east coast late Friday.