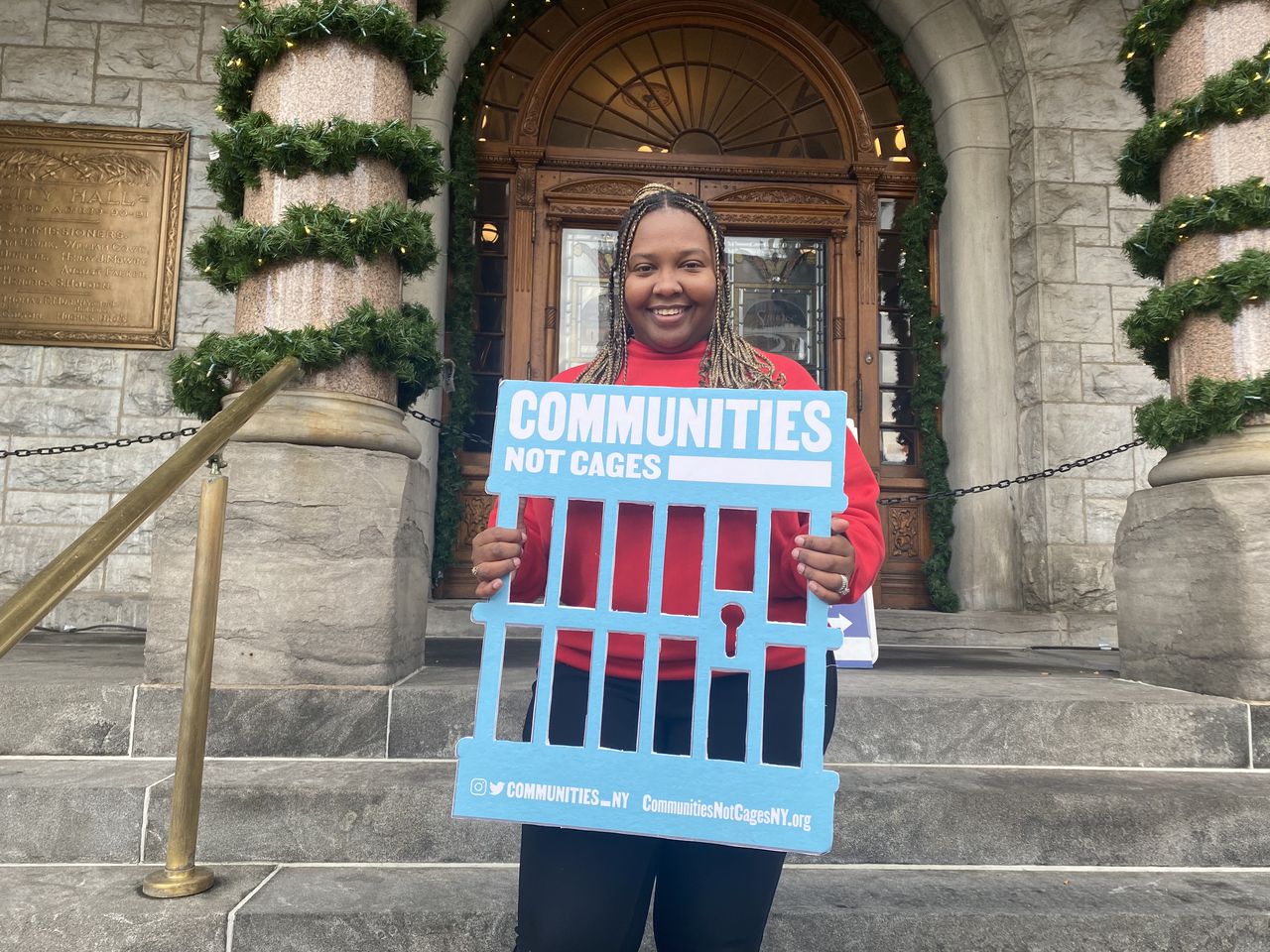 SYRACUSE, NY — Nyatwa Bullock is a member of the Syracuse School Board and a landlady, but she also campaigns for and works to change New York State’s criminal laws.

The 29-year-old Syracuse woman speaks at rallies and encourages elected officials to vote on three bills to eliminate the mandatory minimum sentence, require reviews of long sentences and give people in prison more opportunities for rehabilitation.

Bullock has a personal connection that drives her to push for change: She has a nephew who is serving a long sentence for a murder in Syracuse. His attorney argued he did not commit the crime, he was not the shooter and his family believes he is innocent. Her nephew Deyontay Smith is now serving 25 years in the fatal shooting of Jay Ford in 2017.

Bullock is part of Communities Not Cages, a grassroots campaign launched in 2021 advocating three criminal justice reform bills. She and others recently held a rally outside Syracuse City Hall. The bills they hope to pass are:

Bullock, who also works for the Center for Community Alternatives as a national organizer, said there were a number of reasons for making the bills law, including the disproportionate impact on minority communities and the cost of prisons.

Nearly 30,000, about 75 percent, of those cremated are Black or Hispanic, and advocates point out that 98 percent of convictions in the state are the result of plea bargains.

“Prosecutors are threatening outrageous mandatory minimums to stop due process and extract guilty pleas,” Bullock said. “This undermines the fundamental fairness of our basic constitutional rights.”

According to Bullock, it costs nearly $70,000 a year to house one person in the New York State prison, totaling $3 billion for all inmates.

“New York can’t afford its addiction to mass incarceration,” Bullock said. “That money could instead be spent on education, housing, health care and community-based programs that create real safety in the community.”

Passing and signing the law will not be easy.

Republican candidates have fought on crime and public safety this year and won many, said Grant Reeher, political science professor and director of the Campbell Public Affairs Institute at the Maxwell School at Syracuse University.

He said the bills make sense and could help reduce not only some of the expensive costs of incarceration but some social issues as well.

“But politically, the timing of these things couldn’t be worse,” Reeher said.

Republicans flipped four Democratic congressional seats in upstate New York this year, a feat that has helped them seize control of the House of Representatives.

“The Republicans have had a lot of wins, and they’ve had a gubernatorial race that shouldn’t have been nearly as close on paper as it was,” Reeher said. “One of the main reasons was because [Republican candidate Lee Zeldin] Early on she emphasized crime and public safety, and I can’t imagine the governor thereafter being too anxious to turn around and double down on the sort of thing she was effectively hit on by the opposition.”

Jared Trujillo, a policy advisor for the New York Civil Liberties Union, agreed that this could be a difficult time to pass anything related to criminal justice system reform, but he believes the bills have done so the support needed to move forward.

The bill has 16 Senate sponsors and over 150 organizations have agreed to support them. Trujillo said the political education of these bills is in place and that these are “common sense solutions when people are looking for public safety improvements or answers.”

Two Central New York attorneys with prison experience spoke in support of the bill at a recent rally in Syracuse.

Marcelle Smith, a 42-year-old Native American from Syracuse, said he had been in and out of juvenile detention centers since he was 10. He would later serve 24.5 years for a murder he committed in 1997. Smith was released from prison in May of this year.

During his time in prison, Smith said he participated in and helped create programs focused on rehabilitating incarcerated people.

He was released six months from his 25-year sentence for completing programs in prison and enrolling at Mercy College.

He believes the Second Look Act would have changed the time he served in prison so his accomplishments could count towards a shorter sentence.

Smith now works with Syracuse youth as a mentor at Peace Inc. and the Center for Community Alternatives to help young community members avoid making similar mistakes in the future.

Aaron Chancey, who also spoke at the rally, said he was a double offender and a former inmate who only finished 10th grade. He was sentenced to five years in prison in 1999 at the age of 17 for a bank robbery. He was released in 2001.

Chancey is now pastor of Mount Carmel Seventh-day Adventist Church in Syracuse. He received his GED while incarcerated and currently has a BA in Divinity, a Masters in Divinity and is working on his PhD.

His message: People can change, and prison must be about reform, not lengthy sentences in the name of justice.

“Criminal activity must not be condoned and victims not forgotten, but there should also be aggressive plans in every prison to reform a person physically, mentally, socially, emotionally and spiritually so that each individual will be much better equipped for life ‘ said Chancey.

Staff writer Darian Stevenson covers breaking news, crime and public safety. Have a tip, story idea, question, or comment? You can reach them at [email protected]