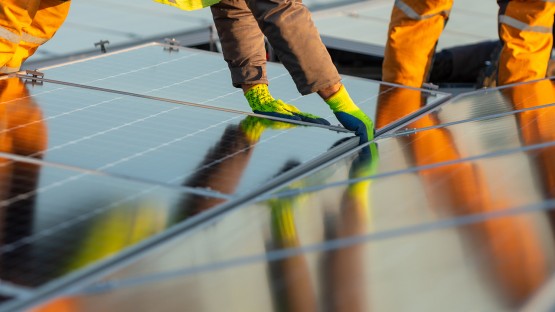 It is the premier academic institution in the United States focused on conducting research and developing policy for governments across the country to support clean energy goals and create union jobs that help build a more inclusive and equitable economy said Alexander Colvin, Ph.D., ’99, Kenneth F. Kahn ’69 Dean of ILR and Martin F. Scheinman ’75, MS ’76, Professor of Conflict Resolution.

“The monumental shift towards decarbonization is being supported at Cornell by the 2030 Project and many other university institutions,” said Colvin. “The ILR school, which is part of the project, is focused on helping unions, state and city governments, businesses and others across the country meet climate goals while creating jobs that improve equal opportunity for people who excluded from economic opportunity because of their race and sex, and other factors.”

Labor coalitions in Maine, Rhode Island, Illinois, Texas, upstate New York and New York City have adopted plans developed by the institute. Its director, Lara Skinner, was instrumental in building a New York union coalition to create climate jobs after Hurricane Sandy in 2012, the most devastating Atlantic hurricane on record. In New York City alone, it killed dozens and resulted in nearly $20 billion in economic losses.

Labor Leading on Climate, part of the ILR Worker Institute and the institute’s forerunner, promoted the US labor-led climate labor movement. Based out of the ILR School’s Manhattan offices, the Climate Jobs Institute has a nationwide presence, with team members also located in Albany and Ithaca. The institute is part of the ILR Center for Applied Work Research and academic partner of the Climate Jobs National Resource Center.

Skinner said, “The Climate Job Institute’s mission is to guide New York and the nation in building a strong, equitable and resilient clean energy economy that will manage the climate crisis, create quality union jobs, fight racial and gender inequality, and create a diverse and inclusive workforce .

“More than ever, policymakers, labor and environmental movements, industry leaders and others need an institute to help them navigate this historic moment. Through applied research expertise, deep relationships with great partners, and innovative training and educational programs, the Institute is helping to build a future that empowers clean energy careers for workers hardest hit by the climate crisis,” said Skinner, who is on the project’s faculty advisory board 2030

Climate jobs include roles in areas such as public transport, manufacturing, and new and retrofit.

An event celebrating the new institute is planned for January 25 at 5 p.m. at the ILR’s New York office. The celebration is jointly sponsored by Climate Jobs New York and the Climate Jobs National Resource Center.

Mary Catt is Director of Communications at the ILR School.