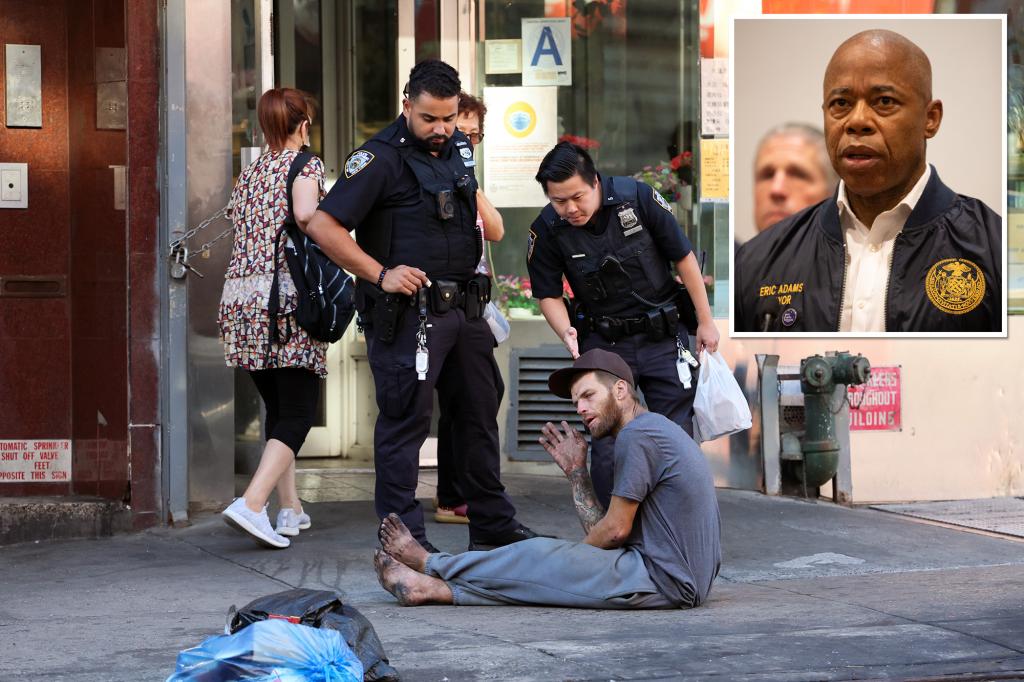 More of the city’s homeless would face costly subpoenas — and even jail — under a new NYPD proposal, The Post has learned.

An NYPD memo detailing the planned push for more subpoenas was presented at a meeting with police officials on Friday — less than two months after Mayor Eric Adams revealed what he called his “compassionate new vision” for the homeless crisis called the city.

The letter from Chief of Patrol John Chell’s office suggests more widespread ticketing for homeless people who are hoarding more than they can take on a trip and/or constructing buildings, according to sources and a copy of the memo, The Post had received.

The subpoenas include misdemeanor charges and require payment of a fine ranging from $50 to $250.

Failure to pay the fine would result in an arrest warrant being issued for the violator, who would then likely be tried and possibly imprisoned if he or she failed to cough up the money.

Although no formal order has been issued since the meeting, thug cops received unofficial orders from commanders this week to issue more parking tickets to people camping on the street, police sources said.

“We don’t have money for it, so what the hell do we do with it?” scoffed Darryl Young, 59, who told the Post he had been homeless for years.

“They can push their tickets. You can push her somewhere it’s not pretty.”

Joile Ortiz Rodriguez, a 43-year-old man who has colon cancer and lupus, fumed at the “stupid” move.

“You’re going to give a ticket to a homeless man who has no means of getting money other than asking for it or stealing it?” Rodríguez said.

“You don’t have a heart,” he said, adding, “Remember, not everything lasts forever… maybe one day you will be in my position.”

Some pundits and political observers agreed with the tramps’ views on the proposal, which would be another step toward a return to “broken window” policing under Adams.

“That sounds like the dumbest thing I’ve ever heard of,” a source on former Mayor Bill de Blasio’s administration said of the idea. “It would [be] contrary to the goal of not using the city’s jails as de facto homeless shelters.”

Dave Giffen, Executive Director of the Coalition for the Homeless added: “It’s absurd.

“That sounds like a very Giuliani-esque approach to the problem. … And that is very worrying for those of us trying to protect the rights of the homeless.”

The NYPD memo cites violations related to “unattended movable property” and “erecting a structure on a public space” when discussing other possible subpoenas for vagrants.

It appears to be just the city’s latest desperate attempt to address its troubling homelessness crisis.

In February, after a series of violent incidents on the rails, Adams sent specially formed teams onto the subways to fight crime and get homeless people to shelters and medical care.

In a city press release at the time, NYPD Commissioner Keechant Sewell called the move a reflection of the NYPD’s commitment to “maintaining the dignity of the homeless and achieving positive outcomes.”

Then, in late November, Adams ordered city police officers to take in mentally ill homeless people for psychiatric evaluation, prompting widespread criticism from attorneys and at least one lawsuit.

“So you’re never going to find a policy that every New Yorker will agree with. But everyone agrees that this is inhumane for people living in this condition,” Adams said at the time.

If the NYPD’s proposed memo becomes official, it won’t be the first time a homeless man has been hit with a subpoena.

According to the department on Wednesday, 14 such subpoenas were issued by police officers during some 4,364 visits to “homeless places” that took place between March 18, 2022 and January 18.

In 2018, 20 police officers gathered to remove a 61-year-old, one-legged homeless man from the Brooklyn square where he had camped for weeks and served a subpoena for storing items on the sidewalk.

However, sources said the new memo suggests subpoenas are a more common tactic by the department.

It’s unclear how the proposal was received at the internal NYPD meeting.

But a Manhattan homeless man who was about to turn up for the night on West 51st Street between Broadway and Eighth Avenue, surrounded by a shopping cart and stuffed garbage bags, had a lot to say.

“It’s totally draconian. Sounds like Eric Adams yo,” the man said of the suggestion.

He added that even a fine wouldn’t stop him from coming back.

Another homeless man, Edward Kavalaity, 58, said on the Bowery: “If they gave me a ticket I would go to court and fight it.”

Either way, “I’m not giving up my Baby Yoda backpack.”

“It’s one thing to clear a camp, but if you’re asking for a subpoena, give [the homeless] a touch with the justice system — these people don’t even have ID cards in many scenarios,” the de Blasio source said.

Stay up to date with today’s most important news

Stay up to date with Evening Update.

“Creating a system to criminalize homelessness in this scenario … just means the homeless go to jail. It’s only going to make things worse,” the source said. “I don’t see the final here.”

Giffen likened the move to something similar to what happened under former Mayor Rudy Giuliani, which criminalized sleeping on the street.

He noted that these people have no homes, let alone money for a fine.

“Some of us can’t go to shelters because some of us have been abused in shelters.”

“You’ve got a bunch of rapists and robbers and a bunch of other people you can use a cell for — not the homeless,” he added.

City Hall and NYPD spokesmen said in a statement to The Post: “There has been no change in Department policy and our role has remained unchanged.

“We’re running the same outreach we’ve been doing since last March, with outreach teams constantly working with New Yorkers who live on the streets and providing services to them.

“Over the past 10 months, our teams, including homeless services, sanitation organizations and other city agencies, have visited thousands of camps and only issued a handful of subpoenas. It’s not about issuing subpoenas, it’s about making sure we’re providing New Yorkers with the appropriate services available.”