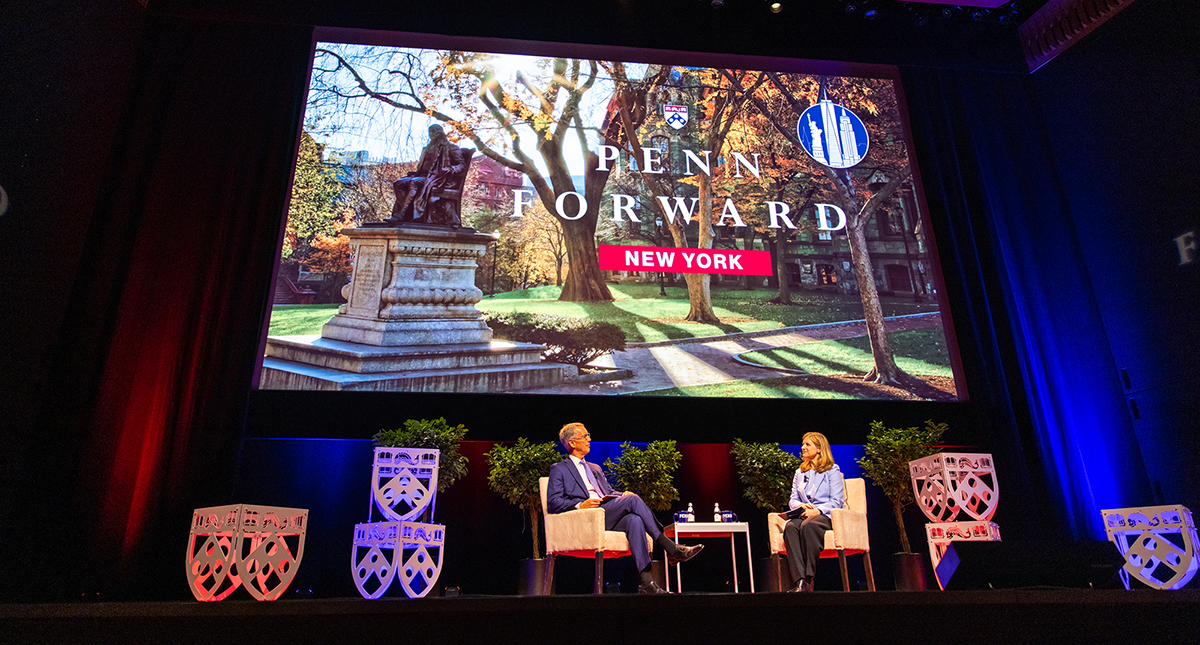 On Wednesday night, nearly 800 New York-based alumni and friends of the university packed Alice Tully Hall at Lincoln Center in Manhattan and joined President Liz Magill for the kick-off of the Penn Forward Tour. The tour, which will criss-cross the US and London through April, brings together graduates of all ages to reconnect and begin to think deeply about Penn’s future with his new leader.

During the program, where Magill took the stage in conversation with Board of Trustees Chair Scott L. Bok, she spent nearly an hour speaking to the crowd about how she’s adjusting to life in Philadelphia, what she’s doing on the what she has learned so far about Penn’s faculty, students and alumni, how she views Penn’s global reach and role, and how she thinks strategically when planning for the university.

With the launch of Tomorrow, Together and its Red and Blue Advisory Committee just ahead of their inauguration in October, Magill said, several themes have already bubbled to the surface, including interest in doubling down on interdisciplinary research and teaching and more from a to cultivate service ethics into everyday student life. Magill’s aspirations and hopes for reinventing Penn are big but achievable: In a nod to Penn’s founder, Benjamin Franklin, she wants the university community to think about how they can “pull the lightning down” together.

“I know it’s a big goal,” she explained, “but in that context, I think shutting down the Flash is doing everything we can to unleash the extraordinary talent of our faculty, staff and students at Penn.” , which we can contribute more to the world.”

In an effort for the participants to get to know her a little better too, Magill spoke to Bok about her background; her family and former role models and mentors; and even her best and worst career advice. After the conversation on stage, Magill mingled with the attendees in the room’s lobby.

Akwugo Nnama, who received her MBA from Wharton in 2018, said it was “amazing” to hear directly from the president. “I think she’s a great fit for the school and I was thrilled to hear how much she loves science and has basically exploded,” Nnama said. “I am very happy about the future of the university in her hands.”

At the start of the program, the new President of Penn introduced alumni, Michael Barrett, Magill and Bok, who graduated from the School of Engineering and Applied Science in 1989 and is a proud Penn parent (twice) and also serves as a University Trustee and -Member serves on the Technology Advisory Board of Penn Engineering and Co-Chairman of the James Brister Society. Barrett shared his personal story and how his work after college led him to live all over the world – from Sweden to Australia to China and Dallas.

“What do these places have in common? The biggest thing for me was the Penn people,” Barrett said, noting that no matter where he lived, he always had a Penn connection nearby. “It makes me feel like I have a second home when I connect with Penn grads.”

The evening event also included a Penn Spectrum pre-reception, at which remarks were made by both Barrett and Rev. Chaz Howard, Penn Chaplain and first vice president of Social Justice and Community. Howard encouraged everyone in the room – many for the first time at such an event since the COVID-19 pandemic – to “fall in love with Penn again, love the university in a new way, in this new chapter that we have.” just started.”

“What I love most about events like this is hearing people’s different stories about why they love Penn,” said Mia Garuccio, who graduated from the College of Arts and Sciences in 2014. “No one loves Penn for the same reason, but different reasons for it. For me it was the mentoring I received.”

It was the first time Ekunda Wonodi, who graduated from Wharton in 2019 and has recently become an alumni interviewer for prospective students, attended a Penn alumni event. Walking through the program with friends she met during her freshman year at Penn, Wonodi said she felt “like a very proud alum.”

“It’s wonderful that the university continues to engage alumni even though we all live in different locations, which gives us the opportunity to meet the President and creates this opportunity to connect with friends old and new,” said Wonodi. “It’s also a good reminder that I’m part of a very impressive network of people who continue to get involved.”